A New Way of Life

How one organization is helping women rebuild their lives after prison

Selena Lopez was 19 when tragedy struck. A week after her mother died, her father was deported to Guatemala. Distraught and confused, the young mother turned to the streets, where she began using drugs and committing robberies to feed her young son, herself and her addiction. Selena Lopez and her son Nathan were brought together again with the help of A New Way of Life.

"I was running amok and ended up circulating in and out of incarceration," Lopez said. As a result, she lost her son, Nathan, to the foster care system.

A year later, she found help at an outpatient drug rehab center in downtown Los Angeles. But Lopez struggled with housing. And without a stable home, she couldn't get her son back.

Lopez's struggle isn't unique. In 2017, 225,060 women were serving time in jail or state or federal prisons. And more than 60 percent of women in state prisons have a child younger than 18, according to the latest data from the U.S. Bureau of Justice Statistics. That's a 750 percent increase since 1980, when 26,378 women were incarcerated.

Lopez's narrative changed for the better when a rehabilitation drug counselor told her about the Reentry Project at A New Way of Life. ANWOL, founded by Susan Burton, provides housing, legal assistance and other resources that formerly incarcerated women need to successfully reenter the community, reunify with family and heal themselves.

For those efforts, the Ford Motor Company Fund recently awarded ANWOL $25,000, the grand prize for its Ford Gives Back Freedom Award. And before that, in 2013, the Ford Fund honored Burton with the Ford Freedom Unsung award, which recognizes the achievements and extraordinary work of ordinary people in the African American community.

"For decades, Susan Burton has opened pathways to success for women that are facing challenges to reentering their community," said Pamela Alexander, director of community development for the Ford Fund. "Without her efforts and her commitment, many would not have had access to support systems they needed to rebuild their lives."

A lost son, then a lost life

Growing up in Aliso Village, a housing project in LA, Susan Burton didn't dream of helping women get clean or reunite with their children. She just wanted a happy family of her own.

In 1981, Burton was a content 30-year-old stay-at-home mom living with her 15-year-old daughter, Antoinette; 5-year-old son, Marque; and her mother. She clearly recalls picking her son up from school, going home and then preparing dinner while Marque played outside. She recalls him proudly coming into the house with a flower for his mom. 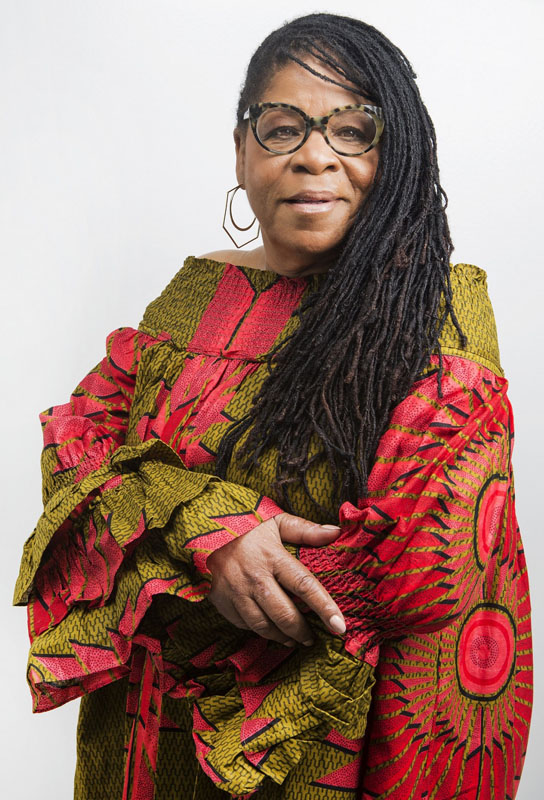 So far, the nonprofit has helped about 1,200 women rebuild their lives.

"It was covered in ants," Burton said.

Then the unthinkable happened when Marque went back outside to play. He was hit by a Los Angeles police detective's car and killed.

"My whole world went out of control," Burton said. "The rage, anger and guilt I had was overwhelming, because a mother is supposed to protect their children. The day I lost my son, Antoinette lost her mother, because I was no good for a long time."

Burton tried drinking away her grief. When that didn't work, she turned to cocaine. She eventually was arrested for drug possession and spent the next 15 years in what she calls "a virtual turnstile of incarceration."

Despite asking the courts for help with her addiction, Burton said she was repeatedly sent to prison. Her last release was in July 1996. But rather than return prison, Burton, in October 1997, learned that the city of Santa Monica, unlike LA, approached drug use as a social problem and provided resources to help.

"I saw a whole new world that white folks had access to in lieu of incarceration," she said. "I took advantage of it and found a treatment center.

"Then I said I'm going to build in South LA what I received in Santa Monica."

After getting a job and saving every dime she could, Burton bought a small house, built five pairs of bunk beds—with help from friends from her 12-step fellowship—and started ANWOL.

"I would go to the bus station and wait for people I knew who were getting out of prison and would invite them to the house," Burton said. "We all lived together, laughed together, went to 12-step meetings together, paid bills together and created a community of women helping women. It was beautiful. We were all there lifting each other up—sharing food, sharing hope and sharing our commitment."

Some of the women lost custody of their children because they didn't have homes for them, which pained Burton.

In 2002, Burton was able to buy a house for formerly incarcerated women and their children. Now she operates 10 homes. 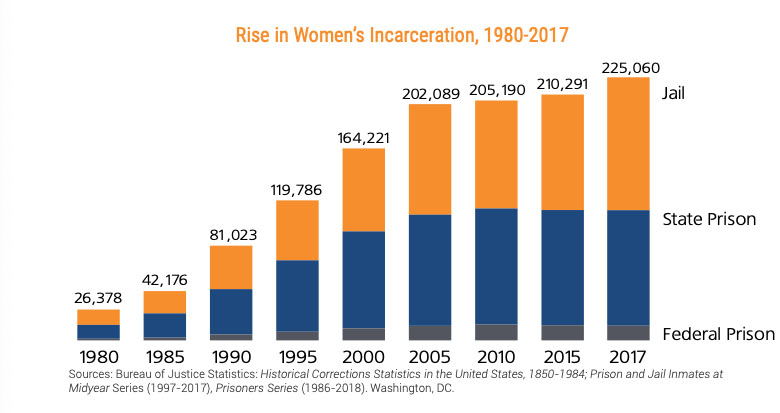 ANWOL has helped more than 300 children reunite with their moms. Selena Lopez's son, Nathan, was one of those children.

"My journey and process were a little longer than others because I was focused on not only maintaining my sobriety but also trying to regain custody of my son," said Lopez, who lived in an ANWOL home with six women for three years.

She attended monthly and weekly meetings in the house, and the program provided transportation to meetings outside the house.

"A New Way of Life's programs helped with the reasons behind the trauma, too," she said.

Yet the most valuable part of Lopez's recovery was the support she received directly from Burton, whom she calls a second mother.

"Coming from where I grew up, you didn't really hear success stories about women who were incarcerated and overcame drug abuse. You only heard the negative," Lopez said. "When I heard Miss Susan's story and the other women's stories, it was amazing to me that there was light at the end of the tunnel."

ANWOL also taught Lopez her rights and how to advocate for herself while going through the complicated child protective services system. Besides staying clean and having a stable home, Lopez had to visit her son twice weekly. But the home he was placed in was five hours away, and she didn't have transportation.

Still, the nonprofit taught her resilience, and Lopez found a way. She donated plasma and used the money to buy 3 a.m. train tickets so she could arrive in time for her 8 a.m. visits.

"It was challenging to have him gone for nearly 2½ years, but he will have been home now for three years because of the whole program," said Lopez, who is now 25.

Burton, who today is 69, believes communities are underresourced in helping victims of trauma.

"We as a community have a shared responsibility in looking out for and caring for each other," she said. "I'm trying to fulfill my responsibility to people who are released from prisons and jails so they have something to come home to and have a way to rebuild their lives and become productive members of our community." 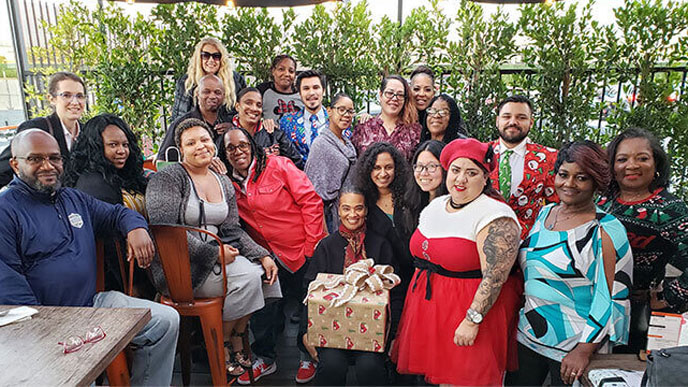 A New Way of Life staff.

ANWOL now has 35 full-time employees, five consultants and hundreds of volunteers—including Lopez. Burton is also training other nonprofits to use the ANWOL model.

She advocates for women in other ways as well. Burton is author of “Becoming Ms. Burton: From Prison to Recovery to Leading the Fight for Incarcerated Women” and co-founder of the civil rights movements All of Us or None and the Formerly Incarcerated and Convicted People and Families Movement. Named one of 18 new civil rights leaders in the U.S. by the Los Angeles Times, Burton received a NAACP Image Award in 2018 for her book and an honorary doctor of humane letters from California State University, Northridge in 2019.

She also advocates against "child snatching"—the act of removing children from the custody of their mothers—and serves on the Sybil Brand Commission, which allows her to inspect county jails and ensure that the incarcerated women are getting the medical care they need.

"Everything about ANWOL is phenomenal," Lopez said. "I remember that first conversation I had with Miss Susan when I arrived at A New Way of Life. She asked my dreams. But I didn't have any dreams, any passion, because I was not expected to do anything with my life."

Now, she said, she's now a happily married homeowner with a second child due just before Christmas. Before the pandemic resulted in her being laid off from her job as a program assistant at Los Angeles Southwest College, Lopez helped students enroll in classes and find resources, such as childcare, to be successful at school. Now she is a full-time student with a near-4.0 grade point average and plans to transfer to UCLA in the spring.

"Everything that I ever dreamed of happened. It keeps me motivated," Lopez said.

She's also determined to stick with ANWOL, particularly its Women Organizing for Justice and Opportunity cohort program, because she wants to stay involved with children and family services and in changing legislation around it.