Learn more about the organizations we work with

Jerome Bettis: Riding the Bus to a Better Life

PITTSBURGH, Pa. — Jerome Bettis is a Pro Football Hall of Famer and Super Bowl champion. In college at the University of Notre Dame, Bettis was a big, strong runner with a bruising style that earned him the nickname The Bus because would-be tacklers were taken for a ride as they tried to bring him down. In 2006, Bettis retired from football after reaching the pinnacle of his career when his Pittsburgh Steelers won Super Bowl XL in his hometown of Detroit. It's a success story with roots in a youth football camp. Reggie McKenzie–another Detroiter and former football star–was an All-American at the University of Michigan and NFL All-Pro offensive lineman. He later became a successful businessman and founder of the Reggie McKenzie Foundation, an organization focused on helping young people through academics and sports. Reggie McKenzie's football camp kicked off a transformation for Jerome Bettis. 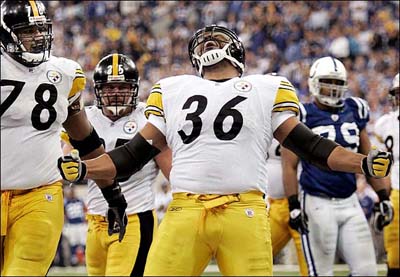 Detroit native Jerome Bettis played 10 of his 13 years in the NFL with the Pittsburgh Steelers after a collegiate career at Notre Dame.

"That football camp changed the trajectory of my life, not my career, my life," said Bettis, who didn't play organized football until high school. "Pepper Johnson, the guy running the camp, went to my high school and had just won the Super Bowl. I got a chance to see professional football players in a different light. I saw they were human, and they put their pants on just like me. I saw that it was possible to do all these things. I said he went to Mackenzie. Ok. It's real. It's possible. I realized that it was wasn't far-fetched. I saw it. At that point, everything changed for me."

Everything wasn't about the Xs and Os of football or running plays. It was about gaining a new attitude, a new confidence, and realizing that football dreams can come true.

"I made sure to take care of business so I could create an opportunity for myself," said Bettis. "If I had not seen it at the camp, I would have kept doing what I was doing and not aspiring to get to that level."

As The Bus began rolling through NFL defenses, he created the Jerome Bettis Bus Stops Here Foundation in 1997 to provide opportunities for inner-city youth to succeed and become productive individuals. Bettis says he wanted to replicate some of the things that benefitted him when he was a kid, in particular the Reggie McKenzie Foundation and its focus on education, mentoring, athletics and community outreach.

"When I got my opportunity to give back, I said to myself I want to do something that can really effect change and provide opportunities and understanding about what's next in life," added Bettis. "I was fortunate to have benefited from it, taken it and ran with it, so to speak. I wanted to open the eyes of young kids, so that maybe they would also take it and run with it." 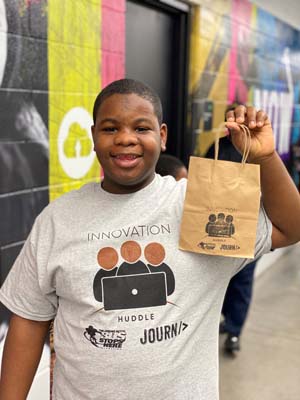 Believing it is critical for all children to access computer science and science, technology, engineering, and mathematics programs, Pro Football Hall of Famer and Super Bowl Champion, Jerome Bettis founded the Innovation Huddle.

The Jerome Bettis Bus Stops Here Foundation has teamed up with Ford Fund and the Ford Resource and Engagement Center (FREC) on Detroit's eastside to offer the Innovation Huddle. The after-school program—one of the most popular at the FREC—introduces young people to computer science, web design and entrepreneurship.

"When I was a kid there was never a thought of entrepreneur. I didn't even know what that was. You went to work every day and that was your existence," explained Bettis. "Now we find out there are opportunities out there to create and we want to open up these young kids to all of the opportunities that are available to them. We want to teach them STEAM education, but we also want to show them some of the things that are possible because once you know that it's possible, you know you can do it."

The Innovation Huddle, which also includes collaboration with the JOURNI Foundation, features a youth business pop-up shop where participants show their business concepts at the FREC. The free event features cool phone chargers, smart watches, handmade bracelets and other items created by the kids. Attendees make their purchases with Innovation Huddle Bucks and the students gain valuable knowledge on how a business works.

On the final day of the course, Bettis joined the celebration, talking with the students and handing out awards. The hope is that the kids will build on the experience going forward. Bettis says it's important to get the students excited about learning and business through things they know. They teach that big companies with popular products, such as Nike shoes or Apple iPhones, all started small with an idea.

"They are selling a product they helped create. They are getting a true understanding of what entrepreneurship is," explained Bettis. "This is the culmination of weeks of work. We had an idea at the beginning of this class and we saw it to fruition. We made that product and sold it, now they know it's possible. Whatever you believe and can conceive can become a finished product. You start small, but who knows what can happen 10, 20 years from now." 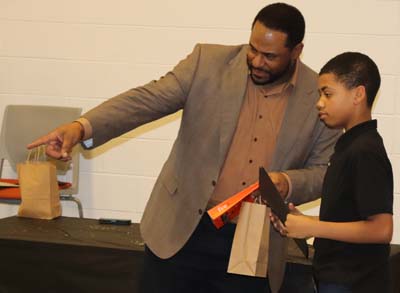 The Innovation Huddle is just one of many programs the Bus Stops Here Foundation offers to help young people succeed. Coding classes help them learn the language of computers to create apps, build web pages or design games. A Summer Technology and Innovation Camp introduces kids to robotics and a variety of technical skills, and Hackathons show students how to use computer programming and teamwork for problem solving. Support from Ford Fund and other organizations help make a difference.

"It's critically important because Ford Fund has the resources that we need," said Bettis. "They have a platform that we can plug into and harness and amplify to reach many more kids than we could ever reach on our own."

And then there's the star power, the kids seeing the success of somebody who started out just like them.

"It gives me a credibility of sorts. I'm not just this guy from corporate America. This guy from a tall building. I'm this guy who played football, came from the same neighborhood that looked like theirs, came from the high school in Detroit, was able to have success and came back to his hometown and he's helping out," added Bettis. "It resonates with the kids. One, because I played football and the kids all watch football and Super Bowl. There is a correlation there. When I tell them I'm from the same place they're from, there's an appreciation for everything that's happened. It's real."

Jerome Bettis is leading by example and understands the importance family, friends and community programs can be in setting the stage for success.

For what sport outside of football does The Bus Foundation provide programming? The answer might surprise you. Click to find out more.

"He comes consistently and makes sure he acknowledges the kids and really shows them they're important, and that they matter to him and to this community," added Justin Kimpson, senior director, Ford Resource and Engagement Center. "Each year the Innovation Huddle gets better and better."

Bettis says the key is to show young people there are many possibilities out there and give them an opportunity to realize some of those dreams. The hardest part is showing kids that it's possible.

"When you dream big, big things can happen and we want to be the engine to provide those big dreams," said Bettis. "Our foundation is all about showing them that anything is possible, if you believe. It happened to me. I grew up with the same issues and hardships, so you can't tell me it's not possible. I did it. If I can do it, I know you guys can do it."