The Bill Ford Better World Challenge is jointly funded by company chairman Bill Ford and the Ford Fund - the philanthropic arm of Ford Motor Company. The Better World Challenge gives employees and non-profit organisations (NPOs) worldwide the opportunity to address critical concerns in their communities such as food, water, shelter and mobility, and to develop sustainable solutions to improve the quality of life for people in need.

World Vision South Africa is a winner of the 2018 Bill Ford Better World Challenge and was awarded a grant of $200,000 (approximately R2.8-million) for its pioneering concept to address the devastating drought affecting the Eastern Cape. Additional funding to the value of $130,000 (around R1.9-million) was awarded by Ford Research and Advanced Engineering. 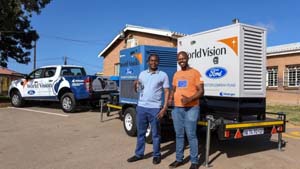 World Vision South Africa was founded in 1967, and is part of the World Vision International Partnership that was created in the 1950s and currently operates in 100 countries, impacting over 200-million vulnerable children and tackling the root causes of poverty in the communities.

For this Ford-backed program, the grants have been used to acquire an innovative Watergen water-from-air solution, imported from the US, which extracts clean and fresh drinking water from the air in an energy-efficient manner. They will also cover the operational costs of the project.

"The Eastern Cape has been severely impacted by drought in recent years, and the poorest communities are the hardest hit. Accordingly, the project will primarily focus on assisting schools, clinics and Early Childhood Development Centres (ECDs), as well as households where the need is greatest," Phiri states.

According to World Vision SA, over the next two years the project will assist many of the 79 schools located in Uitenhage and KwaNobuhle, and will benefit at least four clinics in the area. A total of 50 ECDs will be assisted, along with an estimated 3 400 households.

Mounted on a custom-built heavy-duty double-axle trailer, the unit comprises a Watergen GEN-350 atmospheric water generator that is capable of producing up to 900 litres of water per day, powered by a diesel generator that ensures the system is completely mobile and can be operated in any location.

The rig is towed to sites around Nelson Mandela Bay by the team from World Vision South Africa with a Ford Ranger 2.2 TDCi XL Double Cab that was acquired from Eastern Cape Motors Ford North End in Port Elizabeth.

"Ford is committed to supporting the communities in which we operate through a wide range of volunteer programmes, and through grants awarded by the Ford Motor Company Fund," says Neale Hill, MD of Ford Motor Company of Southern Africa.

"Water is a basic and essential human need, and the World Vision project comes at the perfect time to address the drought that has heavily impacted the Eastern Cape and Nelson Mandela Bay recently. We commend the World Vision team for submitting this fantastic concept to the Bill Ford Better World Challenge last year, and are proud to have it selected as one of the two global winning projects for 2018.

"We look forward to seeing the positive impact this water-generating initiative will have on the communities and organisations that need it most, and Ford is honoured to be associated with World Vision as it makes a real difference in peoples' lives," Hill adds.

Watergen was founded in 2009 and is led by a team of experts with decades of experience in the water, environmental, engineering and healthcare fields.

The company's patented GENius atmospheric water-generating technology uses the humidity in the air to create clean and fresh drinking water. The system was developed to provide safe drinking water in remote areas, as well as to support relief efforts following natural disasters.

The GEN-350 is Watergen's medium-scale mobile unit that can be used indoors or outdoors, and is able to produce up to 900 litres of water per day. The system includes multi-media air filtration to ensure the water it generates is of the highest standard, regardless of air quality.

It uses integrated water purification technology, comprising sediment filtration, mineralisation, activated carbon and microbiological treatment to guarantee the water is always clean and safe for drinking. The system includes a built-in internal reservoir with continuous treatment that circulates the water to keep it fresh and great tasting.

Watergen systems have been successfully deployed in Asia, Latin America, Africa and North America, in particular in the United States. The company has earned numerous international awards, including the CES 2019 Best of Innovation award for Tech for a Better World, and as an honouree for Best Home Appliance. Watergen was selected as a 2018 World Economic Forum Technology Pioneer.