Getting Roundabout to It

They’ve slowly been circling our towns, but have Americans embraced the roundabout?

DEARBORN, Mich. — Every year, between 200 and 300 roundabouts are constructed in the United States. That may be welcome news to those who love their circular logic. But many Americans react like cartoon character Homer Simpson when he gets the family stuck in a London roundabout — they panic.

Why do roundabouts throw U.S. drivers for a curve?

We talked to dozens of experts and roundabout users across the U.S., from traffic engineers to teens to the mayor Carmel, Indiana, which bills itself as the roundabout capital of the U.S.

Carmel Mayor Jim Brainard is quick to list the benefits of corner-less intersections in his city, which has 92,000 people and no fewer than 126 roundabouts, including seven more under construction. In the places where roundabouts have replaced signals or stop signs at intersections, Carmel has seen the following stats:

"They also have huge environmental benefits," Brainard said. "They save thousands of gallons of fuel annually for every roundabout because cars yield as opposed to stopping."

Carmel, which built its first roundabout in 1997, has another reason to be proud of its roundabout renown. One of its traffic circles was named "International Roundabout of the Year" by the UK Roundabout Appreciation Society. It was also featured on the cover of the group's 2017 pinup calendar, as well as the highlighted roundabout for December. 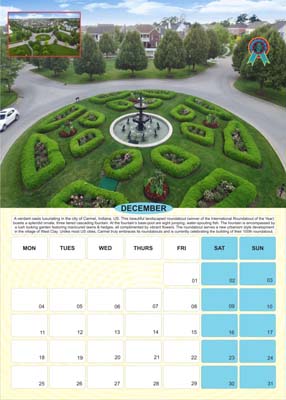 That's high praise for Brainard, who first encountered traffic circles while studying law in England. "Carmel truly embraces its roundabouts," he said. "I would now get flack if I tried to take one out."

The basic idea of a roundabout is to keep traffic flowing and to reduce the number of high speed, side impact and head-on crashes that take place in traditional intersections. With roundabouts, these types of serious crashes essentially are eliminated because vehicles travel in the same direction at lower speeds.

Government and industry studies bear out the benefits when drivers go around in circles. A study released in July from the Insurance Institute of Highway Safety reported that fatal crashes in the state of Washington dropped 90% when a traditional intersection was replaced by a modern roundabout. Crashes where a driver or passenger was injured fell 75%. Pedestrian collisions, meantime, dropped 40%.

Wisconsin is the leading U.S. state for roundabouts with 374, according to Kittelson & Associates, a Portland, Oregon-based transportation research group. Washington is second with 353. (Note: figures may vary as they are updated). Although an exact count is difficult, traffic experts say there are more than 5,000 roundabouts in the U.S. 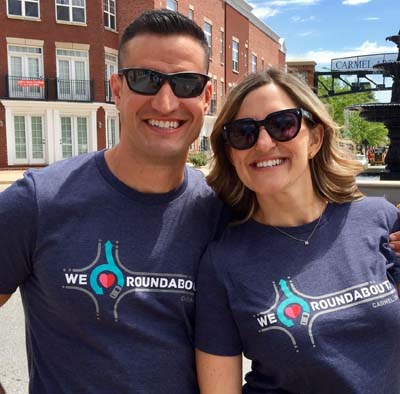 Despite the growing number of U.S. roundabouts, many drivers think they are getting the runaround.

"I am one of those people — I hate'em," Jessica Runyon, 45, from Ohio, said. "No one ever yields when they are supposed to and I've almost been hit more times than I can count."

Abigail McKnight, 17, from Ohio, doesn't like them either. "I feel like most people don't know how to drive in them so it causes issues," she said. "I also think that it makes driving more complicated in some cases when you're driving a route for the first time."

Mike Speck, driving coach for Ford Driving Skills for Life, safe driving program, said from his experience he feels driver behavior plays a big role in whether roundabouts succeed. For instance, those who understand the concept tend to travel faster than others, creating potentially dangerous speed differentials.

"This gap in speed seems to create frustration in some drivers and appears to lead to more aggressive driver behavior," Speck said.

That's where converts like Mark McCulloch come in. McCulloch is an engineer with the Washtenaw County Road Commission in Michigan. McCulloch thinks the problem is poor education of the driving public by the engineers who plan roundabouts.

"This is a disservice we have made to the public," McCulloch said. "We have not collaborated enough with other leverage groups to educate the public. Why? Time and money. The government can't do this alone. We need leverage groups, law enforcement, schools, car insurance agencies to spread the word on our behalf."

McCulloch also does his part by joining online conversations to keep the commentary accurate and factbased — even if the topic comes full circle and gives him grief at home. "I know I'm weird," he said. "My wife thinks I'm weird and she calls me a roundabout internet troll."

Mi Ae Lipe, who writes the Driving in the Real World blog and is a recipient of the U.S. National Highway Traffic Safety Administration's 2017 Public Safety Award, thinks the issue may come down to how Americans feel about driving. Europeans, after all, have been using the tactic since horses and carriages were going in circles in the mid-1700s.

"U.S. intersections are often automated for us with traffic lights or 4-way stops, so we don't practice fully observing and interacting with others as much as we should," Lipe said. "We are more comfortable with rules and procedures. Roundabouts force people to plan ahead and make their own decisions, they can't drive through on autopilot, and this makes drivers fearful and anxious."