The sound of healing

Diane McElfish Helle pulled her car into the parking lot of a Pittsburgh-area hospital and reached for her violin. She planned for this visit, imagining a familiar playlist that would include a mix of hymns, some improvisation and a little solo Bach. And yet, the veteran member of the Grand Rapids Symphony was nervous.

That day in 2006, McElfish Helle’s audience was her father. At age 84, he suffered bleeding of the brain and was in the hospital’s neuro-intensive care unit awaiting a life-saving surgery. The atmosphere was tense, uncertain and stressful.

McElfish Helle sat before her father and, as she opened the case to her violin, her brother shut the room’s door. The music was melodic, soothing and a pleasant relief.

“The staff immediately came and opened the door so they could hear, too. These nurses have a lot of stress in their day,” says McElfish Helle, now 61. “Soon, family members of other patients from around the ICU came to listen at the door and asked if I would come play for them and their loved ones.”

In that moment came McElfish Helle’s inspiration for the Music for Health Initiative.

Led by McElfish Helle, a group of six musicians from the Grand Rapids Symphony launched the Music for Health Initiative in 2013. Collaborating with Spectrum Health of Grand Rapids, the program sends symphony musicians to the system’s network of hospitals where they work with music therapists and care givers to help patients dealing with a myriad of health issues.

What began at the Spectrum Neuro-rehab unit now includes sessions at the Lemmen-Holton Cancer Pavilion, Grand Rapids Home for Veterans, Helen DeVos Children’s Hospital and a pilot program at the Mary Free Bed Rehabilitation Hospital that began in January. During the symphony season, October 2017 through July 2018, musicians will attend up to 68 therapy sessions, serving nearly 1,600 patients.

“We have seen a profound difference in the simple responses we get from patients that we would not otherwise see without the symphony musicians on hand,” says Erin Wegener, 33, a Spectrum Health music therapist who worked closely with McElfish Helle to develop Music for Health. “We are one of the first programs in the country to have professional musicians playing to address non-musical goals. Music for Health is a cutting-edge program that is definitely providing a higher quality of health care.”

Last year, McElfish Helle was one of five symphonic musicians from across the United States to receive a Ford Musician Award for Excellence in Community Service from the League of American Orchestras. The award, made possible by the Ford Motor Company Fund, provided McElfish Helle and the Grand Rapids Symphony each a $2,500 grant. They used the funds to increase the number of participating musicians to 16 this year. Each musician receives more than two hours of annual training to learn about working with patients and coordinating music to therapies. 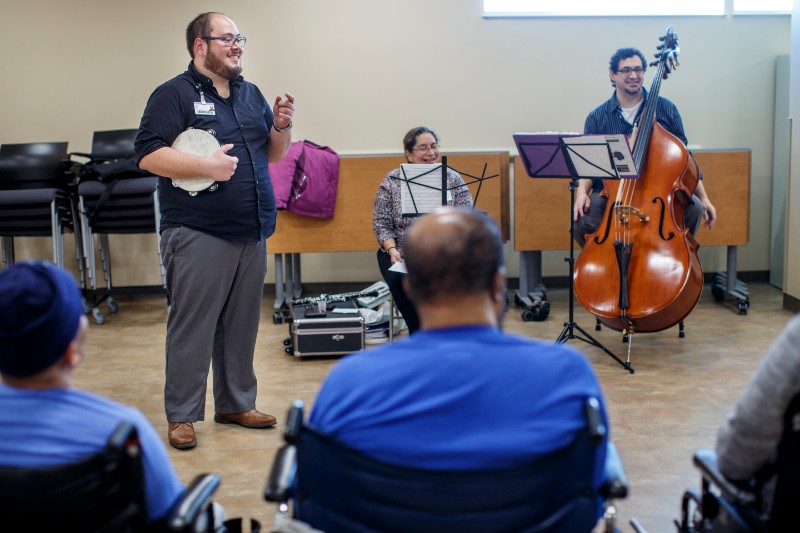 Holding a tambourine, Alika Seu, a Spectrum Health music therapist, and Kathleen Gomez and Michael Hovnanian, of Grand Rapids Symphony, perform as a Music for Health group working with a long-term care population. Approximately 16 musicians are trained for these sessions. Photo by Charlotte Bodak

“Providing access to innovative ideas is core to our mission,” says Yisel Cabrera, government and community relations manager, Ford Fund. “Not only does this program provide new places for talented musicians to perform, it’s providing a much-needed service to people facing stressful circumstances.”

Music for Health also receives support from the Perrigo Company Charitable Foundation and the Getty Education and Community Investment Grants.

Music for Health serves patients suffering from a broad array of medical conditions. Some suffer from severe brain injuries from car accidents, strokes or bad falls. Others are cancer patients undergoing chemotherapy. There are patients requiring full-time, in-hospital care while others live independently. Some are wheelchair bound, non-verbal or unable to track objects with their eyes.

Prior to the program, Spectrum’s music therapists played music on a piano or a hand-held string instrument. At the same time, they worked to guide patients through physical exercises, meditation and relaxation and even tried to help them simply pay attention to the music.

Now, a pair of musicians team up for each session with one playing a low-pitched instrument, the other a high-pitched instrument such as an oboe and a bassoon. Two weeks ahead of a session, the musicians will work with the therapist to determine a playlist. The music can range from Disney tunes for children, to somber or upbeat for patients working on emotional or physical concerns. Occasionally, musicians will take liberties with the music selection in the midst of a session when they deem it necessary. 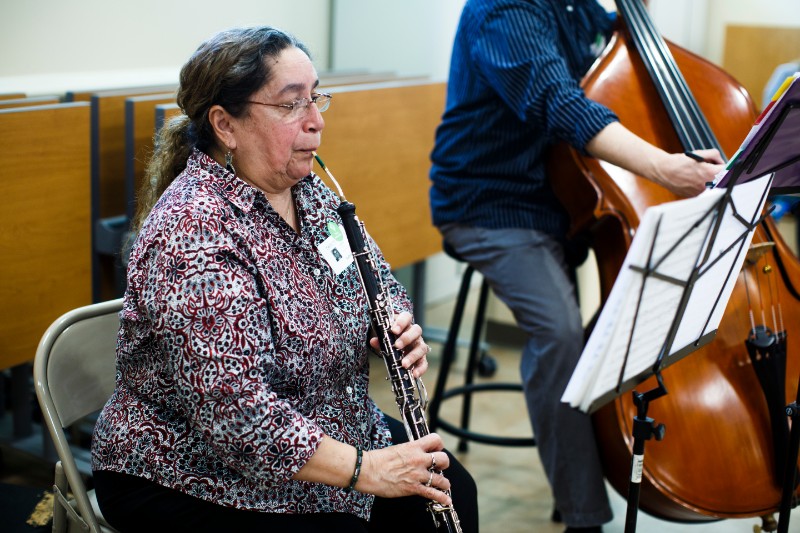 Kathleen Gomez, who plays English horn and oboe as a member of the Grand Rapids Symphony woodwind section, plays the Colonel Boogey March in a monthly Music for Health group. Popularized in the 1957 film Bridge on the River Kwai, the march is upbeat and a pleasant, happy-sounding song. This helps encourage people to move their legs, whistle along with the melody (which helps with respiratory system and speech), multitask (challenging higher-level attention skills and motor coordination) and to enjoy the music and group experience (resulting in mood elevation, reduce depression/anxiety and increased socialization). Photo by Charlotte Bodak

“Musicians are used to responding to the slightest physical cues,” says McElfish Helle. “We are responding to the exact needs of the moment. For example, we can slightly increase the tempo of the music to make the patients do certain motions faster. It’s exciting to see the improvements the patients are making.”

In 2016, the hospital administered surveys to monitor pain and anxiety levels of cancer patients receiving chemotherapy infusions in the Lemmen-Holton Cancer Pavilion. Nearly every patient reported a reduction in those levels when symphony musicians performed during their treatment sessions.

A 2015 survey focusing on neuro-rehab patients found that 95 percent maintained or improved their measure of mood while listening to symphony musicians. When asked how they ranked their self-esteem, 85 percent noted improvement.

“Having the symphony musicians is really helpful so that therapists have more hands-on time with patients who need help,” says Alika Seu, 28, a Spectrum Health Neuro Rehabilitation Services. “Everything happening in a session has a therapeutic purpose. The musicians are highly trained and very flexible which is proving to be successful.”

Cindy Barrus, rehabilitation director at Spectrum Health, agrees. The program is well-regarded and even offers music the symphony musicians recorded that airs on hospital channels at five Spectrum locations.

“When I think about next steps, the first thing I think of are other campuses that can be involved, and I’d love to increase the frequency of the sessions,” says Barrus. “All I need is to win a really big lottery.” 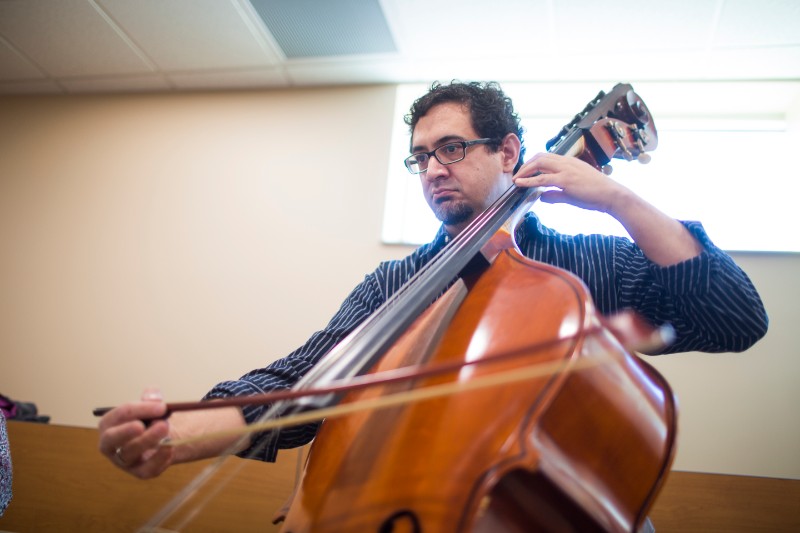 Michael Hovnanian, Grand Rapids Symphony assistant principal bass, uses his talents to support the therapeutic goals of Music for Health. The goals vary throughout each session as the music therapists work with each patient. Photo by Charlotte Bodak