As part of our commitment to community development and education, Ford Motor Company and the Ford Fund have donated nearly $11 million to veterans’ organizations. In this occasional series, we talk with veterans about their time in the military, re-adjusting to civilian society, the nonprofit that helped them move forward, race relations and more.

After graduating high school, Courtenay Reed took a few classes at a community college and worked at a print shop. But he wanted more.

In boot camp, he trained to be a rifleman and to win battles through honor, courage and commitment. Afterward, he became a proficient Engineer Equipment Operator who could handle heavy-equipment, build airfields, clear landing zones and create fuel berms — skills he expected would pay off when he eventually left service.

“I didn’t see close combat — not like they do today or in Vietnam,” says Reed.

Still, he says, the threat of incoming Iraqi Scud missiles and chemical agents were prevalent.

“Air raid sirens and patriot missiles being fired in close proximity to our camp to intercept the Scuds was a terrifying experience, but fear, was not an option.”

In those intense moments, he and his fellow Marines focused on their training, put on their Mission Oriented Protective Posture Gear (chemical agent masks and suits) and let a few expletives fly as they gathered what they needed and helped other Marines get “squared away.”

“Overall, I wouldn’t change that experience for the world,” says Reed. “It was probably what I needed at that time to give me some discipline, guidance and direction.”

Serving also gave him a lifelong brotherhood through fellowship with other Marines.

“Most people have no idea, no clue whatsoever about the military and what serving meant. It was a service to the country. I was able and willing to do my part to maintain our freedoms as Americans.”

Transitioning from the military to civilian society after his honorable discharge in 1991 wasn’t easy. In the Marine Corps, Reed found purpose and direction, but civilian life offered far less structure. 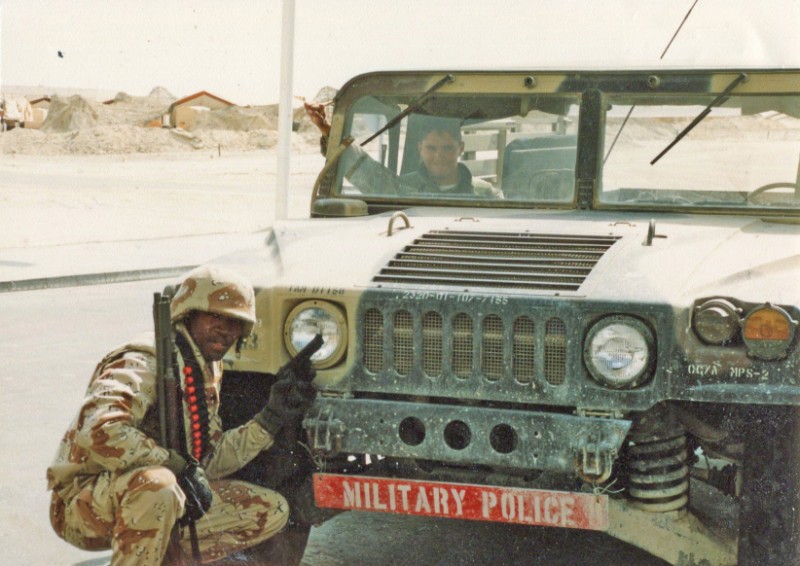 Reed in front of Military Police vehicle in the Middle East during Desert Storm. Photo via Courtenay Reed.

“Out in the civilian world, there’s a range of time for everything. You ease into the work.” 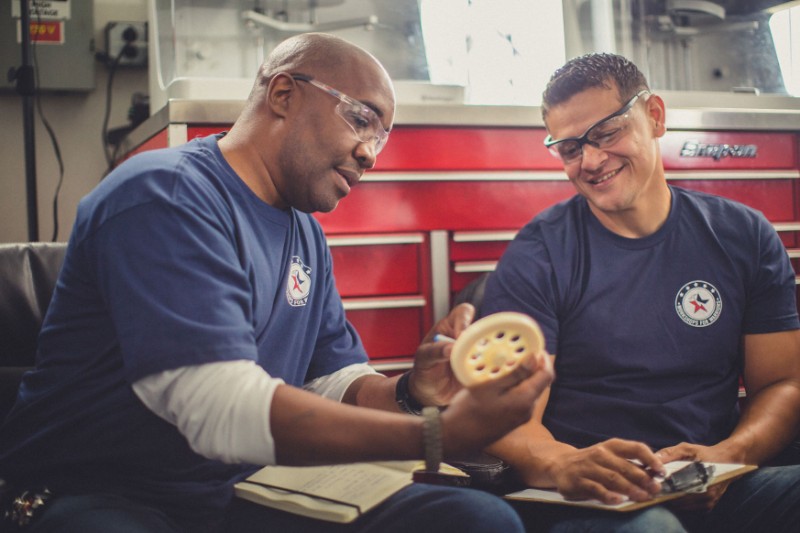 Confident he had gained the skills necessary to do the work, Reed applied for a job as a heavy equipment operator at a construction company. But, he says, the man on the phone chuckled, saying, “‘Son, we have people with 17 years of experience waiting in line for us.’” 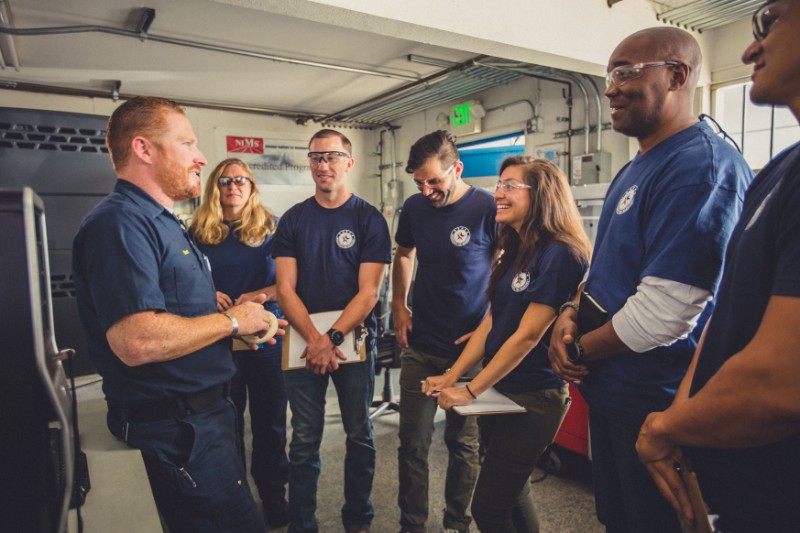 Joining the Rialto Police Department made his transition a little easier, he says, because a police force is “a paramilitary organization with similar characteristics to the military.” And although policing wasn’t part of Reed’s original, post-military plan, he enjoyed the work.

He proudly became a canine officer after only two years, something he calls unusual for new officers. Three years later though, he injured his knee catching a robbery suspect. He needed surgery and time to recover. In the meantime, “they took the dog.”

While his career was going well, Reed’s marriage was falling apart. Perhaps, because he was too alpha, or perhaps it was because he brought the rigid structure of the Marine Corps home, suggests the father of two adult daughters.

Following his 12-year stretch on the police force, Reed found a job he enjoyed in hardware development where he was able to design things, put things together and take things apart to see how they worked. However, after five years, the company decided to move away from hardware development and Reed was left to reconsider his options.

“If there is no purpose or direction in what one is doing and you have no plan, someone else will implement one for you. I wanted more direction and less anxiety and less stress.”

After some searching online, Reed eventually came across San Diego-based Workshops for Warriors, a Ford Motor Company Fund-supported nonprofit that helps train, certify and provide work experience in skilled trades for veterans and transitioning military service members so they can develop careers in advanced manufacturing.

Now Reed is almost where he wants to be, and Workshops for Warriors is helping him get there by providing training in CNC (Computer Numerically Controlled) machining and welding.

There, he says, he’s gaining another set of tools for his life.

Next, Reed hopes to help other veterans define and reach their goals.

“Although all the experiences I have had until now have been great, they pointed me to do this. When I got divorced, I had an empty house. Five years later, my house was full of tools and stuff that put me back to where I was when I got out of the Marine Corps.

“These skilled trades reduce the mundane for the creative mind. It is therapeutic and engaging; and oftentimes, the end result of the ‘widget’ (I created) provides a sense of accomplishment.”

While Reed’s ultimate goal is to run his own business manufacturing automotive or aftermarket parts for 4x4 vehicles or hot rods that is just a vehicle for him to be a support system for other veterans.

“I would like to help people — whether I’m teaching a skilled trade or giving guidance into what to do next. I love seeing people grow. When I got out (of the military) there was none of that.”

On how the military has changed
“When I got out (in 1991), there was this month or two, or maybe six months, that they gave you to re-acclimate to the civilian side of things. It was like: ‘Thanks for playing, here you go.’ They kind of kick you out with nothing. Now, (veterans) get housing that the GI bill covers along with university, and that’s great.”

On race in the military
“We all went through boot camp: They break you down, build you back up and make sure you can work as a unit. …There weren’t light green Marines or dark green Marines. There was just green.”

On women in military combat
“They can be just as capable. Not all men are capable. As far as my daughters, I told my youngest to stay away from the Army and Marines and go to the Air Force, Coast Guard or Navy. She’s in the process of joining the Navy .... I just felt there might be better job options that would allow for her to walk into a civilian job. I said, ‘Once you get out, this will give you life experience and direction based on your service….’”

On veterans’ issues that need to be addressed
“Veterans have willingly signed up to go where they need to go and do what they are told to do. When we complete our service and come home, it is another fight with the V.A. to get the resources or care we need to continue to be productive in society and in our lives. Now, I know how the Vietnam veterans felt. Recently, they said the V.A. is taking responsibility for Agent Orange with presumptive medical issues as a result of exposure: Let’s see what they do with Gulf War Syndrome. So, health care and acceptance of disabilities could get exponentially better.”

On taking a knee or standing during the National Anthem
“I was always taught to stand for that — whether at attention or with my hand on my heart. Respect. We are in America. That’s what we do. The other side of that, I know people have their opinions on different things.”