David Leenhouts loved preaching in the pulpit. But after 25 years, frequent health challenges required him to take substantial time off, and then he was forced into early retirement. Worse still, when Leenhouts lost his job, he lost his home, because the United Methodist Church in east Ohio provided his housing.

“It’s been a long year,” says Leenhouts, a thoughtful man with a warm smile who keeps his walker nearby. “I was only 58 years old. I wasn’t planning to retire or move. What was I going to do?” 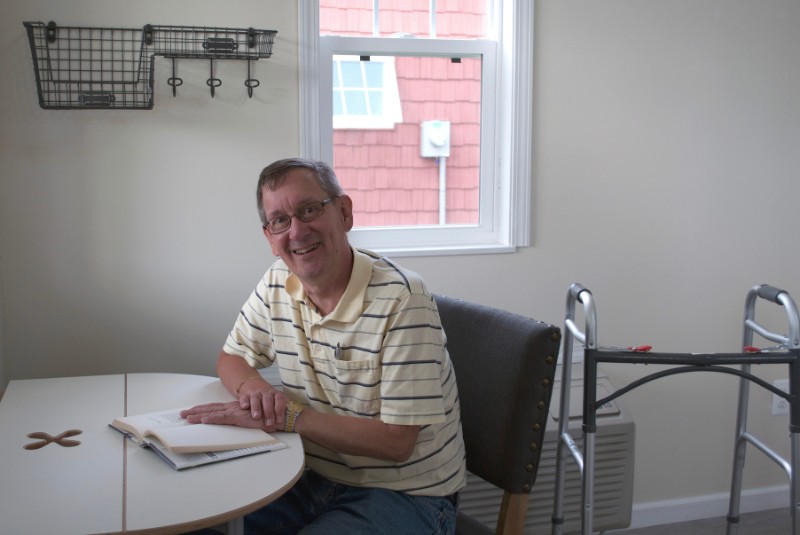 He returned to Michigan and moved into transitional housing at Cass Community Social Services in Detroit, which has been running residential programs for the homeless for 15 years. Then late last summer, life became more complicated after Leenhouts put his hand on a television to steady himself as he stood and it fell over, breaking his leg.

“This changed his life at a profound level,” says Rev. Faith Fowler, executive director of Cass Community Social Services. “He’s not driving now, he’s not working now. He was a very hardworking pastor.”

Now, Leenhouts lives off a small amount of savings and Social Security that together pay him less than $17,000 a year — less than the federal poverty line in Michigan.

People such as Leenhouts — who have some income but not enough to afford a decent place to live — are who Fowler and her staff had in mind when they conceived of developing a 25-house community of tiny homes in Detroit’s North End, north of New Center and west of the Lodge freeway.

“We were looking for a solution for people who had been homeless but acquired a job or had some money but not enough to live in clean, safe housing,” Fowler says.

So far, Cass has built seven studio-size and one-bedroom tiny homes using 2,450 volunteer hours — including assistance from the Ford Volunteer Corps and students. Fowler says ground breaking for five additional homes likely will begin this fall — once they receive the approved City permits — and be complete and occupied by March.

As organizations around the country seek more solutions to homelessness, the number of tiny-home communities continues to rise. However, most of these homes are transitional and look like bland government housing projects rather than homes in vibrant neighborhoods.

Tiny Home Detroit is unique in that each home has a distinctive interior and exterior design, along with bathrooms, security alarms and appliances.

More important, Cass offers something that no other tiny-home community is offering low-income people — a safety net in the form of an asset. Residents will own their homes after seven years of paying utilities (estimated at $35 or less each month) and a fixed-rate rent that’s based on the home’s square footage ($1 per square foot) and within each resident’s budget.

Fowler says even programs such as Habitat for Humanity Detroit, which requires applicants to qualify for a mortgage, don’t reach the people Cass wants to help. Tiny Homes Detroit helps those who make as little as $725 a month or $8,700 a year, she says.

“They never would qualify for a Habitat for Humanity program,” says Fowler. “They would just be stuck renting for the rest of their lives.” 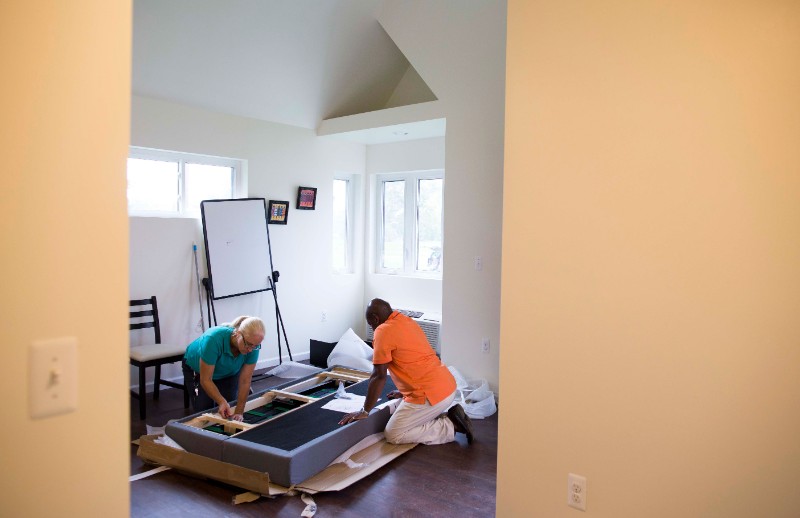 “Faith came to us with a truly innovative solution for helping the homeless,” says Jim Vella, president, Ford Motor Company Fund and Community Services. “Not only is it a sustainable project but it fits our mission of improving lives through innovation and access to opportunities.”

Vella points out another reason Tiny Homes Detroit makes sense: Fowler and Cass are creating a new neighborhood in what otherwise would be blighted space.

“Detroit has a lot of vacant land. This project is something Detroit can point to as adding value in an underserved part of the city,” says Vella.

Fowler’s inspiration to find a permanent solution to homelessness came after she received a small inheritance from her mother. 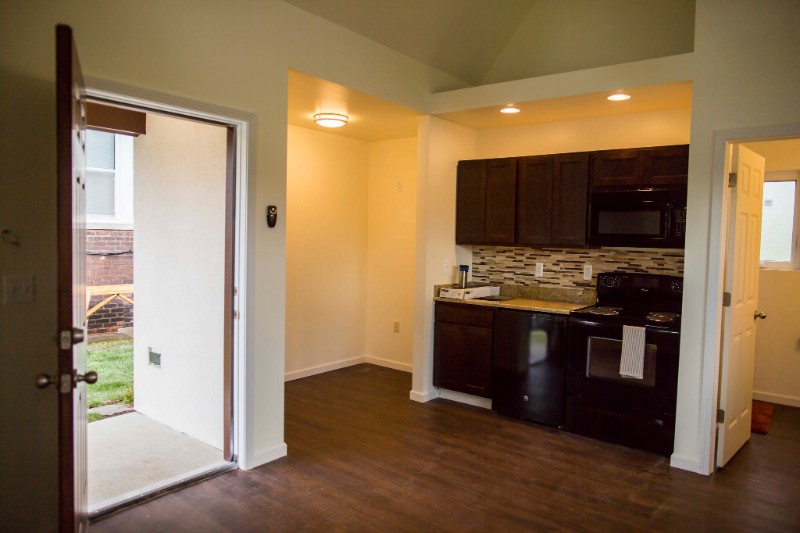 “Whenever I got in trouble, I could go to my mom or my dad and say, ‘Hey, I need help.’ And they would help. If you’re poor, you don’t have that. Your parents love you just as much, but they can’t rescue you.”

Everyone talks about ending homelessness, and Fowler says that’s great. “But then what? I can’t raise the minimum wage, but I can help people obtain an asset. It allows them to have what most of us take for granted.”

“Owning can definitely be an incentive to working hard and getting the rent paid,” says Berg, whose group works with local and federal governments to find the best ways to deal with homelessness.

Cindy Crain, CEO of the Metro Dallas Homeless Alliance, calls owning “a fascinating concept.” The Alliance and CitySquare installed 50 tiny homes, called Cottages at Hickory Crossing, last fall to help put individuals with two or more chronic health conditions back on the road to wellness. Once their health is stable, after about 3 ½ years, she says Hickory Crossing residents leave for permanent housing.

The Cass Tiny Home Detroit community “is not just a road to wellness, but acquiring an asset is a road to wealth,” Crain says. Homeownership, she notes, is a dream that most low-income people don’t even try to achieve. Instead, they concentrate on day-to-day survival.

Norm Suchar says HUD’s Office of Special Needs Assistance Programs (SNAP) tries to encourage homeownership in many of its programs. However, the SNAP director says what is most important is helping homeless individuals move off the streets or from shelters and into transitional and then permanent housing. Once there, they have the rights and services any tenant would have.

A tiny home provides something else transitional housing doesn’t — autonomy, Crain says. “The ability to close your door, a private space, a safe space. That helps provide respect and trust.”

Still, says Berg of the National Alliance, successful housing programs don’t just provide a place to live but successful programs help people get past their problems so they can lead more stable lives.

Constructing connection Donald Burnes, founder and board chairman of the Burnes Center on Poverty and Homelessness at the University of Denver, says most groups that create housing pay little attention to “the most significant part” of alleviating homelessness — creating networks of support in these communities.

“All of us who are not without homes, we have some kind of network of support,” Burnes says. “I have someone I can call on at 2 a.m. if I have a crisis. Most of these folks don’t.”

At Tiny Homes Detroit, residents will become part of a homeowners association that will help select new residents if rentable homes become available.

Fowler and her team have intentionally chosen residents with a variety of ages, educational backgrounds and experiences to make the community diverse like the surrounding neighborhoods.

All seven Cass tiny homes are occupied. Residents include Keith (last name withheld for privacy), a devoted Cass employee whose family members died during his incarceration. Like many who come to Cass for help, Keith lacked a safety net.

“Where else would I go? I’m thrilled,” says Leenhouts, who plans to put a typewriter by the window of his 300-square-foot home so he can continue writing sermons. “My hands are the only things I can use now.”