On a sweltering July day in the outskirts of Chongqing, China, four bassoonists from the Detroit Symphony Orchestra are holding a live concert on the factory floor of a Ford Motor Company assembly plant.

At lunchtime, the assembly line of new Ford Escorts comes to a stop. Two dozen workers in blue shirts gather for the show. The music starts. It ranges from Motown to Stephen Sondheim to the more classical Bassango.

Fingers snap as the quartet starts a bassoon rendition of The Temptations’ My Girl. More than 40 years and a world apart, the workers in blue respond to the familiar melody.

If the protruding, delicate, wooden instruments look and sound out of place amid the clank of a car factory, nobody shows it. In fact, one of the musicians turns out to have a fan. Jin Yang, a university student interning in the final assembly area, recognizes Michael Ke Ma, a native of Shanghai who now lives in Detroit. She is eager for his autograph.

When the music stops, Ford Motor Company Fund President Jim Vella tells the workers through an interpreter how the musicians came to play at a Ford factory. The DSO is on an historic tour of Asia and is in China for the first time ever. Ford, a major supporter of the DSO since the 1930s, is sponsoring the tour as part of its long-term commitment to major Detroit arts institutions. 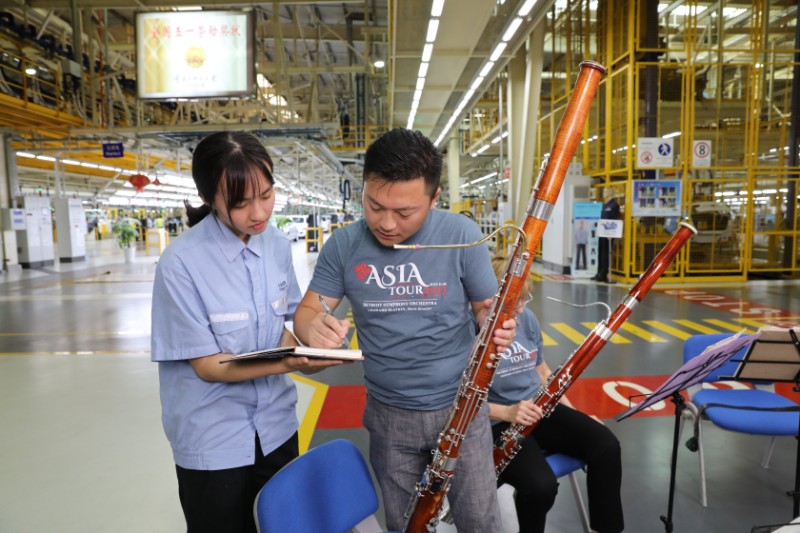 But Ford’s involvement goes further. The DSO’s bassoon section is practicing double reed diplomacy, bringing different people together through their instruments. It’s one of Ford’s goals in supporting the tour.

“This tour not only shares some of Detroit with our employees in China, it uses the international language of music to forge stronger bonds between different cultures,” says Jim Vella. “Promoting events that bring people together is also core to our mission of strengthening communities wherever Ford does business.”

As the DSO launches its 2017-18 season, here is a look back at some of the connections the DSO and Ford made during the orchestra’s time in China.

The scene is the headquarters of Non-Profit Incubator in a bustling Shanghai neighborhood. Known as NPI, the group is a non-governmental organization that assists more than 1,000 nonprofits and social entrepreneurs across China.

On this late summer evening, NPI is hosting a benefit concert by two DSO musicians who are sharing the stage with Sunflower, an organization Ford works with that provides educational services for the children of migrant workers, a disadvantaged population often deprived of access to quality schools, health care and social services. Proceeds from the evening are going to Shanghai Healing Home, a 24-hour facility and foster home for orphans who are either awaiting or recovering from medical care. 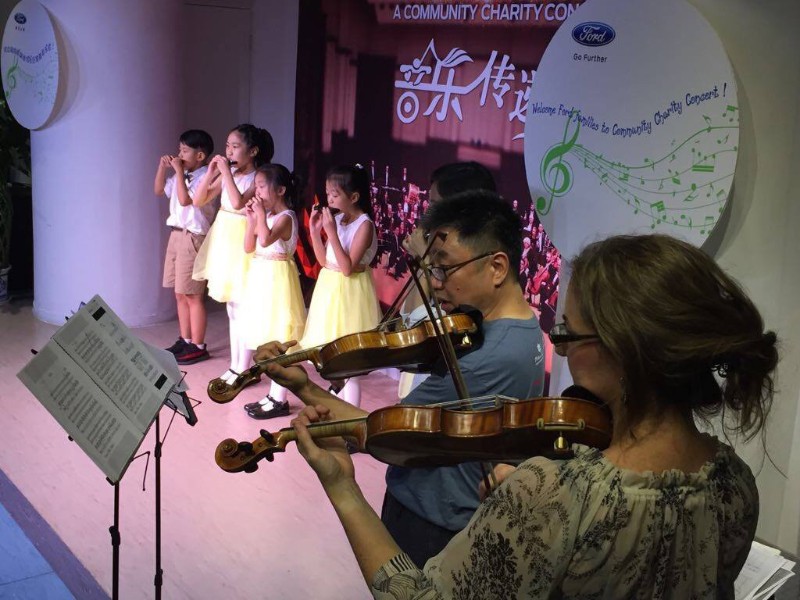 The audience includes Ford employees and their children, as well as members of the New Voice Children’s Choir, a group dedicated to providing migrant and low-income children access to choral music. Two VIPs from the classical music world are also there — DSO Music Director Leonard Slatkin and his wife, composer Cindy McTee.

The modest rooms are stuffy as the air conditioning struggles to keep up with the record-setting summer heat wave in Shanghai. Dressed in crisp white shirts, the younger children from Sunflower sing while the older students strum guitars. Meanwhile, Kimberly Kaloyanides Kennedy, the DSO’s associate concertmaster, softly weaves in an improvised violin accompaniment that sharpens the poignancy of the moment.

For violinist Hai-Xin Wu, the DSO’s assistant concertmaster and a Shanghai native, the evening is particularly special. He is doing triple duty as performer, translator and cultural diplomat.

“For us, this is a music concert. But for these children — it can be life-changing,” he tells the audience.

Before entering the Shanghai Healing Home, visitors must take off their shoes and wash their hands to keep the center clean. The 34 children at the home range in age from infants to 6 year olds. On this day, the orphans are buzzing with excitement over the many visitors. A girl, about 3 years old, wearing a dress colored like an American flag walks to the Ford visitors with arms outstretched. She wants to be picked up. 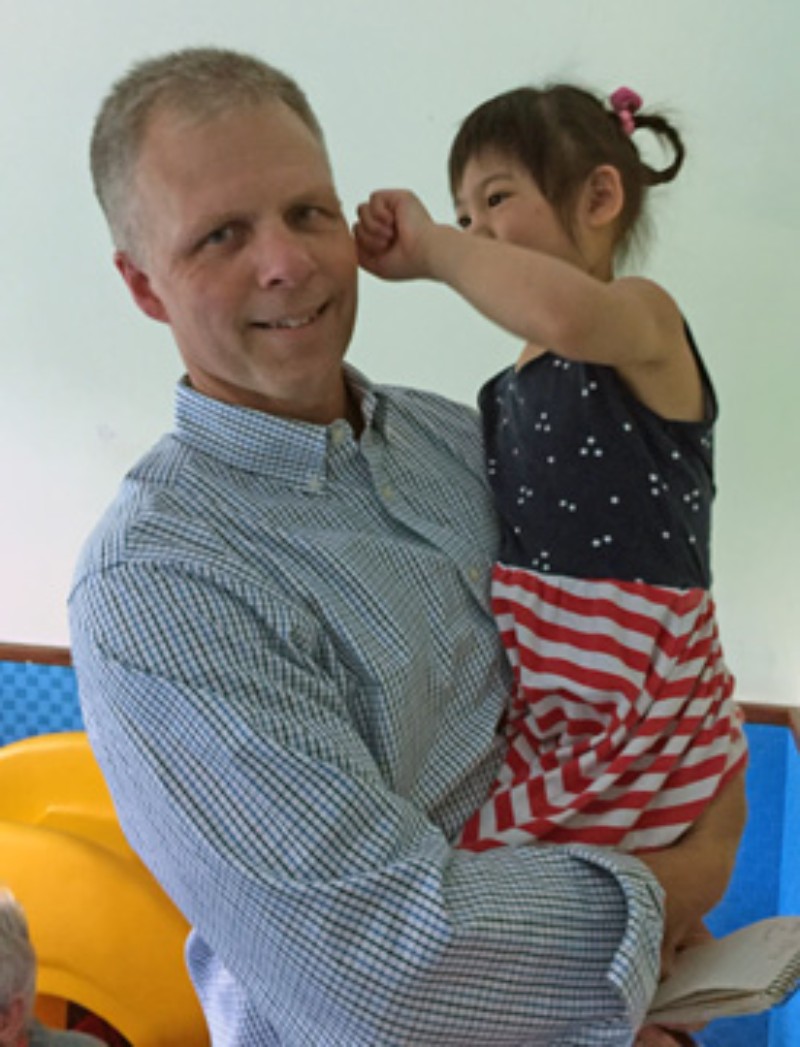 As the children gather in an upstairs room, the chattering and crying gets louder until three DSO musicians begin playing Für Elise, a popular Ludwig van Beethoven melody. A hush falls upon the room.

“That’s the first time I’ve ever had our kids this quiet,” says Aaron Gfeller, an American from South Carolina and assistant director of the home. Together, he and his wife Jessica — both registered nurses — manage the facility.

Für Elise, it turns out, is familiar to the children. Anita Laurila, one of several Ford volunteers at the home, starts her weekly music classes with the Beethoven tune.

The DSO musicians, Principal Clarinet Ralph Skiano, Bass Clarinet Shannon Orme and Assistant Principal Basson Michael Ke Ma, manage to keep the kids entertained so the adults may hear the reason for the visit. Jim Vella presents Aaron with a check for 98,000 yuan, equivalent to $14,700. The money is a combined donation from the Ford Fund and personal collections taken the evening before at NPI concert.

To put things in perspective, Aaron estimates those funds will pay for the care of three babies for six months.

As the musicians play, the orphanage’s younger children sit on stools being fed. A handful of staff manage the round-the-clock care. Additional help comes from volunteers, often American expats who work at companies like Ford.

The volunteering sometimes leads to long-term bonds with Western visitors. One American Ford family will be repatriating soon — with an adopted 3-year-old girl they spent two years fostering.

The plight of the orphans touch Chinese volunteers, too. Tina Zhang, a Chinese Ford communications volunteer in Shanghai, also spends time regularly in the center. On the day of the donation, Zang is accompanied by her 9-year-old daughter who wants a sibling and asks if they could adopt one of the orphans.

Individual impact in a global world

Ford's support of the DSO's Asian tour and its community outreach is a fitting way to celebrate the remarkable career and travels of Dave and Carol Schoch.

The Schochs attended the final concert in Shanghai on July 29, just two days before Dave retired from Ford after 40 years. Starting as a financial analyst at Ford’s engine plant outside Cleveland, Ohio, he worked in Europe, South America, South Africa and Asia, rising to become president of Ford's Asia Pacific operations. 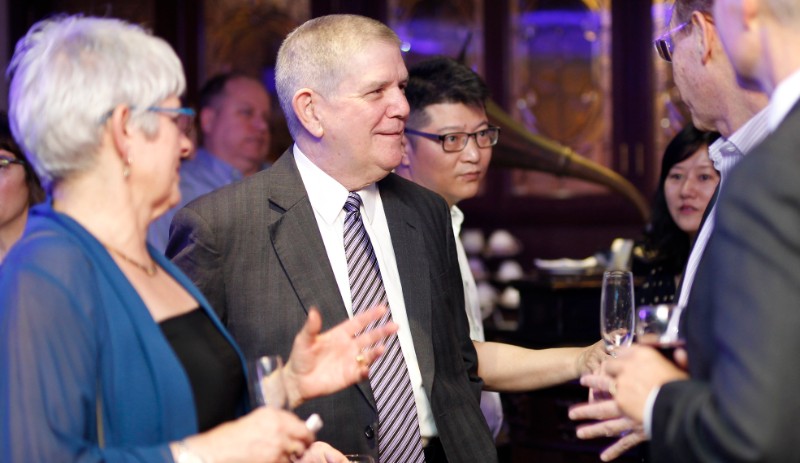 Carol and Dave Schoch at Ford Motor Company event. They were personally and professionally invested in their communities as they worked around the globe. Photo courtesy Hugo Hu

The pair embody the power of individuals in a global world. As Dave worked his way up in management, he came to see the community impact Ford could have in addition to employing workers and making vehicles.

When the couple was in South Africa, Dave witnessed the devastating impact of HIV/AIDS. Ten percent of the population was affected. Working with Managing Director Lewis Booth and other Ford senior management, Dave took part in an award-winning program that included stopping production for a day to educate workers about HIV/AIDS.

The company went so far as to provide access to prophylactics in its plants as part of an ongoing program of HIV/AIDS prevention and awareness. For Dave, it was a long way away from tracking the cost of engine castings in Ohio.

“The HIV/Aids situation in South Africa was the 'Ah-ha!' moment for me in how industry should look to give back and support the community,” he says.

In later jobs, Dave initiated and championed sustainability and employee volunteering efforts at Ford’s Asia Pacific operations. As a member of the Ford Fund’s board of directors, he was a driving force in the nonprofit’s expansion to 49 international markets since 2010.

Meantime, Carol, the mother of three girls, put to use her undergraduate and graduate degrees in music performance, education and choral conducting wherever the family lived. She taught music and launched a choral music program in Brazil. She performed in England and South Africa. She is the mastermind behind the Detroit Children's Choir, a 350-member group that was launched to teach choral music to children across a range of economic, ethnic and religious groups.

While in China, she performed and became involved in groups that introduced Chinese singers to Western choral music. She also became involved in helping migrant children, which led to her starting the New Voice Children’s Choir — the group that attended the NPI concert.

Why do companies such as Ford sponsor orchestral tours overseas? The orchestra receives an international boost, to be sure, and concert-goers are introduced to Ford’s commitment to the arts and culture.

But what lasts after the music ends?

The answer is in the moments, memories and friendships that bring new meaning to the interpretation of community.

After the second encore at the DSO’s final concert in the Shanghai Oriental Art Center — the end of a three-week, 11-city, two-country tour — Leonard Slatkin looked relieved but content as he addressed the audience. Speaking in English, he introduced the seven orchestra members from China, five of them from Shanghai. He explained they are members of the DSO’s international family, and he invited the audience to visit Detroit, where they would be welcomed as family. The enthusiastic applause suggested no translation was necessary.

After the tour, the performances, and many side visits along the way, DSO President and CEO Anne Parsons summed it up this way: “We learn best through experiences, and this has been an amazing experience.”