Signing for the times

The scene inside Café X in a bustling neighborhood on the east side of Cologne, Germany, looks like any other. Diverse groups of patrons are seated at tables and bars, interacting and socializing. Yet this might be one of the quietest cafés in the world.

Without saying a single word, a man orders a coffee with milk and sugar and a young waitress understands him immediately. How? He placed his order using German Sign Language to a waitress who is deaf.

She is one of 40 registered servers at Café ohne Worte (Café Without Words), a social start-up concept that’s creating job opportunities for people who are deaf or hard of hearing and connecting them with hearing people in an inviting environment.

“For most hearing people, a trip to a cafés is a spontaneous, enjoyable experience,” says Frederike Höfermann, a 20-year-old business student from the University of Cologne.

But, she says, hearing-impaired customers find themselves having to point and nod when ordering rather than using sign language to communicate. Otherwise, they have to carefully plan their social diaries so they can coordinate with a friend who can sign to them and translate to the wait staff.

• Hearing people often shy away from contact with them, leaving deaf and hard-of-hearing individuals in social isolation.
• Even when they have the necessary job skills, hearing-impaired people find many potential employers assume communication would be too difficult and don’t hire them. As a result, Haffer says, between 30 and 50 percent of deaf people in Germany are unemployed.

Wanting to break down barriers, end prejudices and increase opportunities, Haffer, Höfermann, and other student colleagues working on community projects researched services available to the deaf and hard of hearing. Among their discoveries:

• German businesses are struggling to hire the government’s required 5 percent of disabled individuals.
• Experts predict more than 90 million Europeans will suffer from hearing impairment by 2025.

Höfermann says society needs to build a feasible path that will get more people with disabilities in the labor market and boosts interaction between hearing and hearing-impaired people.

Starting at the student organization Enactus, the team created Café ohne Worte, a pop-up café that encourages the hearing and deaf community to connect in a warm, welcoming environment. Working with an existing establishment, deaf staff members run the café and customers use sign language symbols on the menu to order. Games that can help the hearing and deaf interact also are available.

Mica Magiera has been working at the cafes for about seven months. “Being deaf can effectively cut you from the rest of society. The feeling of isolation can result from not only living in silence, but struggling sometimes to get your voice heard,” she says. “Working at Café ohne Worte has been so much fun and so worthwhile. It’s all about abilities rather than disabilities, and that is music to my ears.”

Recognizing the good it can do, Café ohne Worte is among the winners of the 2017 German Ford College Community Challenge, an education program from the Ford Fund that provides grants to student-lead programs focused on building sustainable communities.

“We strive to make people’s lives better and bring communities together,” says Debbie Chennells, manager at Ford Fund, Ford of Europe. “This is such an inspiring project to be involved in, both to see the difference that is made to those who are deaf or hard of hearing and the enthusiasm.” 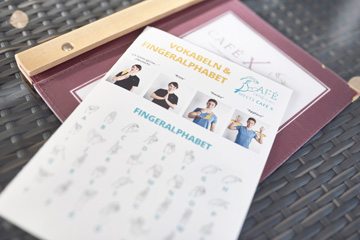 The Café ohne Worte team partners with local deaf associations and integration service agencies to recruit wait staff and receives support from cafés, restaurants and wine bar owners who make their premises available for the pop-up (or short-term) events. This allows them to hold temporary cafés at various times and in various locations across Germany and reach multiple communities.

In the near future, the Café ohne Worte founders expect to not only offer event packages to cafés, restaurants and bars, but to more companies as well. In addition to the pop-up events, they plan to become an employment agency advocating for and supporting inclusion of hearing-impaired people on staff at major corporations.

“With strong partners like Ford Motor Company Fund, Enactus and the Social Impact Lab, we are already expanding well beyond the borders of our region,” Höfermann says. “We already found four waiters in Munich, five waiters in Hamburg, six waiters in Berlin and many more all over Germany, enabling us to host events everywhere.”

A growing number of places and businesses are recognizing the deaf and hard of hearing community.