As a proud 21-year-old Salvadoran-American, passionate about advocating for the rights of immigrants in the United States, I am pursuing a double major in political science and Spanish at McDaniel College in Westminster, Md.

The first in my family to attend college in the United States, I know the void for Latinas in higher education is far too wide. I’d like to work toward closing this gap and opening a big door for other Latinas who follow my steps. My goals include becoming an immigration attorney and earning a Ph.D. to teach college-level Spanish.

These are some of the ambitions that propelled me to find more opportunities that will enrich me professionally and personally. 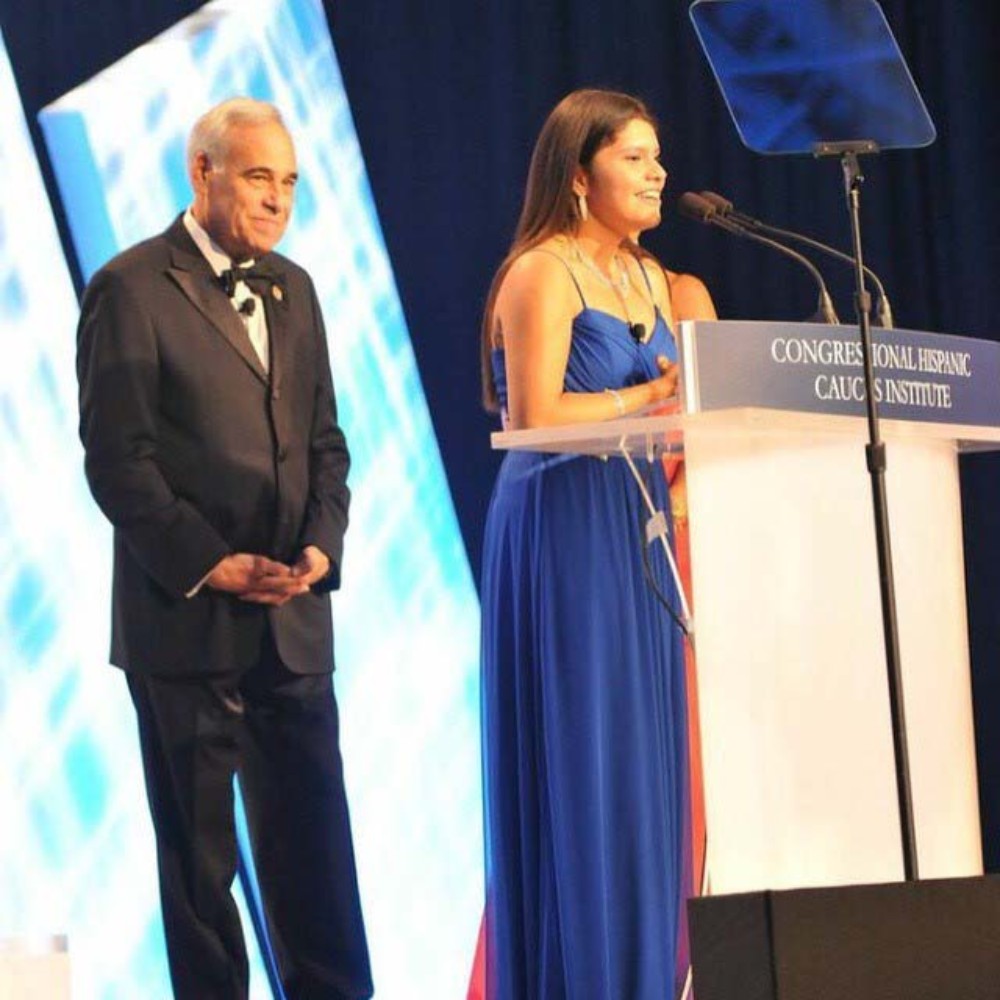 Flor Jasmin Chavez Cruz talks about everything she accomplished during the R2L NextGen program and her new-found sense of empowerment at the Congressional Hispanic Caucus Institute (CHCI) gala.

I found that 40 years ago, internships were practically unheard of. Today, they are a must for students and employers looking to get and stay ahead.

“Graduates who complete three or more internships are more likely to secure full-time employment, with 81.1 percent of graduates reporting that the internships helped them shift their career directions,” states Looksharp.com in its most recent report for millennial hiring.

There may not be a 401(k) and retirement package built into internships just yet, but there are countless benefits for companies and students like me who venture into this territory.

As an intern, I’ve been able to test-drive many interests in different industries, modify my academic path based on my experiences and practice oh-so-important networking skills.

The benefit to companies is that they get technologically savvy young people, like me, and fresh perspectives that allow them to foster greater innovation and strategies, especially in the digital and social media spheres.

I had the opportunity, between 2014 and 2016, to participate in two Ford Fund-sponsored summer programs. The first was the Congressional Hispanic Caucus Institute’s R2L NextGen Program, a week-long leadership summit for Latino high school students.

It helped me realize I can be a leader in my community. If it weren’t for NextGen, I would not have found my second internship opportunity, Smithsonian Latino Center’s Young Ambassadors Program.

YAP kicks off with a career-building week in Washington, D.C., and includes a five-week internship that continues with lifelong mentorship — a support program that helps students continue their development.

My YAP internship led me to meet Dolores Huerta, one of my heroes and a Latina leader I wrote about in high school. Huerta is a Mexican-American labor leader and Civil Rights activist who co-founded the National Farmworkers Association. In her career, she was brave enough to take on big issues. She also stood for what she believed was right to strengthen and advance her community.

I met Huerta when the National Portrait Gallery, one of the Smithsonian Institution’s museums, was unveiling “One Live: Dolores Huerta,” an exhibition that highlighted her role in the California farmworkers’ movement of the 60s and 70s. I was so excited to share my high school paper with her. We spoke about my experience growing up in an underserved community and my dream of running for office. I remember Huerta looked me straight in the eye and said, “Never stop chasing after that dream.” A couple of days later, Barbara Carrasco, the artist behind Huerta’s iconic pink portrait, e-mailed me to let me know that Huerta enjoyed reading my paper.

While in D.C., I also became involved with the national office of the League of United Latin American Citizens (LULAC).

After listening to Latina women with whom I identify and who look like me, and connecting with them through internship programs and organizations, I realized that I, too, could become a successful Latina leader. The experiences inspired me to give back to my community in ways I had not considered.

From internship to leadership

During my freshman year of college, I won a $1,500 Griswold-Zepp grant to implement a program that involved science, technology, engineering and math workshops in my Maryland community. 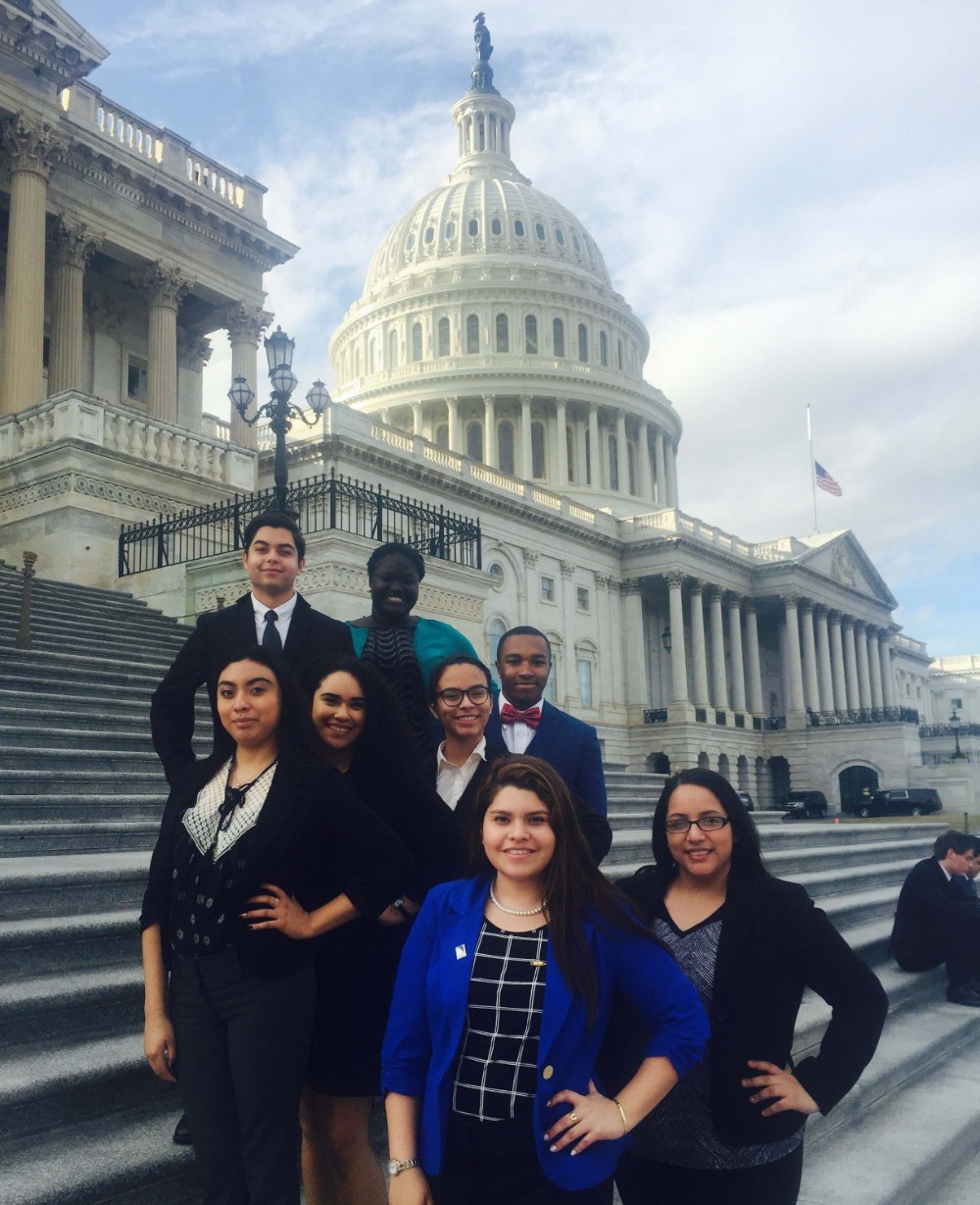 Chavez, founder and president, McDaniel LULAC and the CHCI R2L NextGen class pose on the steps of the U.S. Capitol building in Washington, D.C.

That summer, I launched week-long workshops where 50 elementary and middle school students built rockets, robots, volcanoes and more at the same community center that had helped my parents 18 years earlier.

I will never forget the excitement and the curiosity in the eyes of the children. One day, I hope to turn this program into a nonprofit organization.
That same school year, I founded a LULAC student organization at McDaniel.

My success as president of McDaniel LULAC, in part, is due to the knowledge I gathered during my internships. I was able to bring in speakers I met at networking events. And my prior relationship with LULAC’s National office paved a way for me to not only bring my council to lobby on the Hill, but to also take an active role in conferences and galas.

These opportunities also opened my eyes to other programs and drive my passion and belief that I can do more.

I’m a Global Fellow and advisory board member for the McDaniel College’s Global Bridge program, for U.S.-based students who previously lived abroad or have bicultural/binational roots.

Down the road, I want to run for Congress. First, though, I’m off to Mexico with a Spanish literature scholarship at the Benito Juárez Autonomous University of Oaxaca.

Internship opportunities will enhance your understanding of the field you want to pursue. You will also be able to network with individuals who can support your professional goals. A helpful website to find internships, scholarships and fellowships is www.chcinextopp.net.