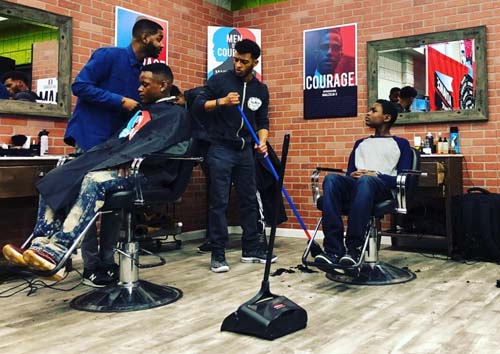 CINCINNATI, July 29, 2019 — Ford Motor Company Fund, the philanthropic arm of Ford Motor Company, announced today the two finalists that will compete in the Men of Courage Cincinnati Barbershop Challenge. Barbershop finalists Razor 1 Kutz and Precision Blendz will compete over the next three months to win a $10,000 grant based on their implementation of initiatives and activities that educate and reinforce positive narratives around African American men.

"We extend congratulations to the two barbershop finalists," said Pamela Alexander, director of Community Development, Ford Motor Company Fund. "We are excited for this new and innovative chapter in the Men of Courage program. These barbers are advocates and ambassadors in their community and we look forward to working with them."

Razor 1 Kutz, owned by Donald Hudson, is one of the two finalists selected. "It feels great to be selected as one of the finalists in the Men of Courage Cincinnati Barbershop Challenge," says Hudson. "It's a blessing that all my hard work is being recognized and now we have a chance to show it." Their plan is to create a tutorial space for neighborhood kids using an underutilized area in the lower level of the building.

The second finalist, Precision Blendz, is owned by Tommy Mays and Michael Thomas, Jr., who feel motivated and encouraged to be more creative in doing community outreach events and welcome a little friendly competition. "I've been talking to all my clients and they brought forth a whole lot of input on these ideas," says co-owner Mays. "We have the community behind us. We are looking forward to continue being Men of Courage." The shop is over 10 years old and is looking to refresh the premises and use the funds to upgrade their customer experience.

Barbershop owners from the metro Cincinnati area were invited to apply by providing proposals that mirror the Men of Courage mission for a chance to win financial support to implement those ideas. The finalists will submit ideas to host a minimum of six events over the next three months and will be judged by a panel of Ford Fund and The National Underground Railroad Freedom Center (NURFC) representatives on innovation and community impact.

The Men of Courage Barbershop Challenge is an extension of Ford's Men of Courage program – an initiative aimed at furthering the narrative of positive imagery and messaging around African American men. The challenge centers on a keystone in communities, the African American barbershop, and encourages shop owners to utilize their existing foundation for community conversation as a launch pad to turn those ideas into community outreach.

Ford will support their efforts by leveraging partnerships with NURFC in Cincinnati and others such as Microsoft to create fun and engaging activities such as coding workshops, Xbox game nights and LinkedIn job searches. The finalists will receive a barbershop transformation that consists of new seating, Men of Courage branding and signage.

The Men of Courage program serves as a complimentary grassroots activation to the Men of Change: Power. Triumph. Truth. exhibition at NURFC August 17 - December 1, 2019. Created by the Smithsonian Institution Traveling Exhibition Service (SITES), Men of Change is made possible through the support of Ford Motor Company Fund and highlights revolutionary men—including Muhammad Ali, James Baldwin, Ta-Nehisi Coates, W.E.B. Du Bois and Kendrick Lamar— whose journeys have altered the history and culture of the country. Cincinnati's Freedom Center is the first stop of the national three-year tour. For more information visit sites.si.edu.

For more information on programs that support the African American community, go to http://fgb.life.

As the philanthropic arm of Ford Motor Company, Ford Fund’s mission is to strengthen communities and help make people’s lives better. Working with dealers and nonprofit partners in more than 60 countries, Ford Fund provides access to opportunities and resources that help people reach their full potential. Since 1949, Ford Fund has invested more than $2 billion in programs that support education, promote safe driving, enrich community life and encourage employee volunteering. For more information, visit www.fordfund.org or join us at @FordFund on Facebook and Twitter.

Ford Motor Company's Men of Courage (MOC) initiative launched in 2015 as a grassroots program designed to build communities by advancing the narrative of black men through storytelling, intergenerational forums, and community programs. Since its inception, MOC has hosted forums in five cities and reported more than 2,000 of its toolkit downloads across 34 cities throughout the U.S.

The National Underground Railroad Freedom Center opened in August 2004 on the banks of the Ohio River in downtown Cincinnati, Ohio. Since then, more than 1.3 million people have visited its permanent and changing exhibits and public programs, inspiring everyone to take courageous steps for freedom. Two million people have utilized educational resources online at freedomcenter.org, working to connect the lessons of the Underground Railroad to inform and inspire today's global and local fight for freedom. Partnerships include Historians Against Slavery, Polaris Project, Free the Slaves, US Department of State and International Justice Mission. In 2014, the National Underground Railroad Freedom Center launched a new online resource in the fight against modern slavery, www.endslaverynow.org. For more information on NURFC, visit https://freedomcenter.org.