Would you know if your child was experimenting with or using drugs? Would you be able to spot the clues?

DEARBORN, Mich. — Today's parents are dealing with an opioid epidemic, high-potency marijuana and in some states, the decriminalization of marijuana.

"Teens are coming up with crafty but simple ways to disguise their interest in drugs," Lt. Kenneth T. Pelland from the Grosse Ile, Michigan Police Department explained.

Lt. Pelland works closely with the Strive 4 A Safer Drive program, a safe teen driving initiative offered to all Michigan high schools by Ford Driving Skills for Life and the Michigan Office of Highway Safety. Not only does Lt. Pelland teach teens about the consequences of impaired driving, he also educates parents on drug trends, paraphernalia and hidden compartments.

"Articles of clothing can have drug references that go unnoticed by those not familiar with the new drug culture," Lt. Pelland said. "Most would recognize a marijuana leaf printed on a t-shirt, but what about "shatter," "710," "dab city" or "BHO?" These are all slang terms for marijuana concentrates, a high-potency THC extract, and are indicators that the person is into using the drug."

Not only do teens use clothing as a way to connect with others that use drugs, several of these items contain ‘stashing' places to hide their contraband. Hidden compartments can be built into sleeves, hat brims and under the soles of shoes and can easily fit small amounts of marijuana, pills, or other substances. Also, bracelets, drawstrings on sweatshirts and belt buckles are examples of items worn in plain view that have been designed to be used as marijuana pipes. 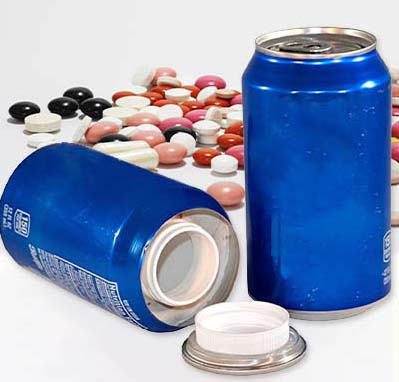 Hidden compartments can be built into a variety of everyday items.

It doesn't stop with clothing. Water bottles, highlighter markers, car keys, hair brushes and iPhone cases are examples of everyday items used to either hide drugs or use as paraphernalia. Dryer sheets, incense and air deodorizers can be used to mask the odor of marijuana smoke in homes and cars.

"Every generation of parents must contend with new and unique challenges when it comes to raising children and confronting drug use," Lt. Pelland said. "The bottom line? Parents need to know the signs and keep up with the trends and technology that will help indicate if their teens are experimenting with drugs."

If parents see any of these telltale items, think twice about giving your teen the keys for the night, and make time for another conversation regarding the dangers of drugs, especially when getting behind the wheel.

Highlighters and markers are examples of everyday items used to either hide drugs or use as paraphernalia.

Researchers estimate that nearly 44 percent of drivers in fatal car crashes test positive for drugs.* And, one third of surveyed teens think it's legal to drive under the influence of marijuana in states where recreational use by adults is legal.**

Identifying and addressing potential problem behavior early is crucial to preventing tragic consequences in our homes, on our roads, and in our communities.

** The study, which surveyed 2,800 teens from high schools across the country and 1,000 parents of licensed teenage drivers, was commissioned by Liberty Mutual Insurance and SADD (Students Against Destructive Decisions).