I've been teaching high school band for 32 years, in California and Texas. I have given seminars and private instruction all over the United States. My goal is to get kids to college on band scholarships.

"My favorite story is of a female flute player who today is in the U.S. Marine Corps Band. She is a local girl. I mentored her through the audition process, which was quite rigorous. She had the talent but not the confidence. She wasn't able to get transportation to the audition, so we got the Marines to come to our school to hear her. After she was selected, she still wasn't sure about accepting. I told her: ‘It's ok to be scared. But it's not ok to be paralyzed by that fear.'"

Roberto Romano is director of the nationally recognized band program at Thomas Jefferson High School in Dallas. A combination of genuine talent and misfortune brought attention to his students who received a new line of musical instruments to replace those destroyed in the tornado of 2019. Last month, the Latin GRAMMY Cultural Foundation and Ford Motor Company Fund donated $20,000 toward the instruments.

"The timing gods were with us," Romano said. "Until now, they had been against us—the tornado destroyed our school. Then COVID. Then the ice storm. Then Ford Fund and the Latin GRAMMY came through as a serious ray of sunshine. The kids are thrilled." 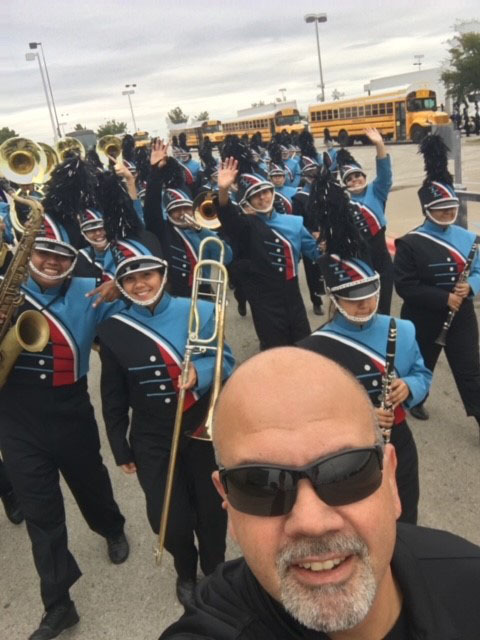 Romano's students are the beneficiaries of a single-minded instructor who believes strongly that music opens doors.

As a young drummer in California, Romano was influenced by a dedicated teacher who convinced him he was good enough to go to college on a band scholarship. A percussion scholarship took him to one of the country's leading collegiate music programs at the University of North Texas.

Ever since, Romano has been reaching back into the academic pipeline, spreading his influence over younger and younger kids. Pre-COVID, he and a few student musicians visited district middle schools weekly to speak to band kids and seek out those with talent—and dedication. The Thomas Jefferson Band program that awaits them in high school is worth the hard work.

"Working hard and believing in themselves is what keeps our kids going," Romano said. "Still, they don't have the advantage of taking private lessons or, in some cases, even owning their own instruments."

Romano is currently focused on getting the kids who quit band during the pandemic to return to the program. Many teens had to give up after-school practice and go to work, he said.

"The majority of our kids will not play professionally," Romano said. "And that's ok. I tell them, you can still get a scholarship to play your trumpet and be a business major. Practice your instrument, and you'll be successful. How you get there is through band.

Latin GRAMMY In The Schools is an educational program that informs and connects music students with professionals in the Latin music industry and supports educational music departments that have financial limitations. On May 27, 2021, The Latin GRAMMY Cultural Foundation®, in partnership with Ford Motor Company Fund, the philanthropic arm of Ford, donated musical instruments to Thomas Jefferson High School in Dallas, Texas. The donation coincided with the virtual Latin GRAMMY In The Schools educational program, featuring a conversation and performance by Latin GRAMMY-winning singer and songwriter Chiquis.