Disposing of electronics into a landfill poses a huge risk of heavy metals (like lead) leaching into the water supplies. For example, CRT television and monitors, on average, have several pounds of lead in each unit. These items must be disassembled by hand, washed and cleaned in order to collect and dispose of the lead safely."

That's why Dan Skielnik, IT facilities engineer, spends several months each year planning and organizing a huge recycling initiative during which Ford employees can off-load their historically gotta-have, once-cool devices.

The big stuff is welcome: oversized desktop computers (once called tubes), tower-size hard-drives, television sets, bag car phones with antennae, old plug-in radios that sit on nightstands. And of course, so are the micro-devices. Remember iPods? And everything in between.

In 10 years, some 10,000 employees have donated electronic items to be recycled. The devices are collected and passed on to Motor City Computer where they are either disassembled and cleaned for proper and safe disposal, or refurbished and donated.

The plastic, glass and metal components of the recycled devices are shredded and used in the manufacturing of other consumable goods.

"It's not just the toxic issues of disposing electronics that is important, but it's recycling the components that can be reused," he said. 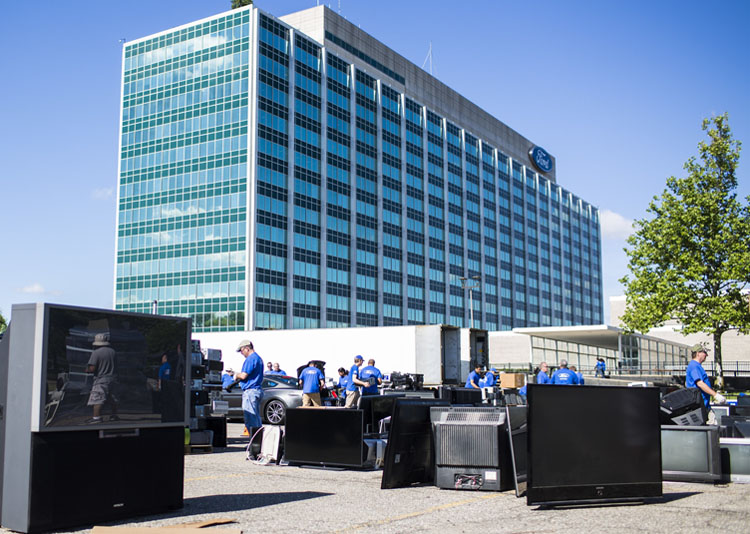 Unfortunately, the everyday items that pile up at home—burned out light bulbs and expired batteries are not accepted. Neither are those non-working stoves, refrigerators, dishwashers and microwave ovens holding court in your garage or basement.

Though they can't handle those items, Skielnik cares about the end-of-life treatment for all electronics.

"We are increasingly trying to find ways to refer employees to other means of recycling their household items in their local communities," Skielnik said.

Skielnik first learned about the recycling initiative while attending a series of Lunch and Learn sessions related to IT and green solutions. He was a regular as he liked the topics: low-power usage components, green printing initiatives, green building design.

"Eventually, the group's founders had to move on, and I ended up filling the leadership role that was left vacant so the group didn't dissolve," he said. "This event grew out of that group as members discussed how to dispose of old electronics."

By the third year of the recycling event, Skielnik stepped up to run it. He knew there was potential for it to expand and tapped the Ford Volunteer Corps to help advertise the date, explain the drop-off process and ask employees to sign up so Motor City Computer would have an idea of how many devices to expect.

The annual event has been growing consistently, and Skielnik is proud that his team's work is helping to keep electronic devices out of landfills.

"Word was spreading and it quickly outgrew the small group of people working it at IT headquarters," Skielnik said. "We had to find a way to make it happen. I was able to seek out the Ford Volunteer Corps to recruit new volunteers. We also began using a bigger lot near WHQ." 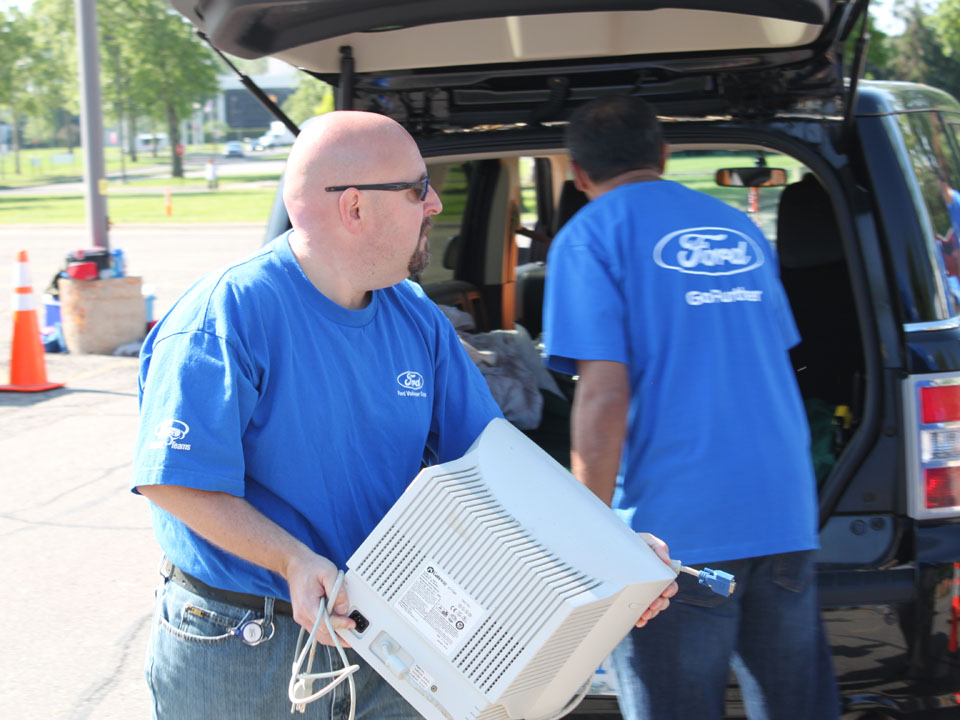 The annual event, held each spring, was cancelled this year due to COVID. But last year and those preceding, about 60 volunteers staffed the all-day collection event.

Meanwhile, plants are showing interest in conducting similar events of their own and Skielnik and team are there to help.

"We are assisting Michigan Assembly and Livonia Transmission plants that have been holding similar recycling events," he said. "We share best practices and helped them connect with the recycling company. That is key to this whole thing. That's what make the event successful."

Skielnik gets personal satisfaction out of the fact that there is an intrinsic good in this simple recycling event.

"Today's electronic devices have pretty short lives. If I can share my knowledge to help people understand the benefits of recycling and reusing them, that's a good thing. You shouldn't just throw your old cell phone in the garbage.