DEARBORN, Mich. — The day you thought would never arrive, has come. With wide eyes and a sweaty brow, you listen as your teen tells you how excited they are to get behind the wheel of the family car. (Gulp) 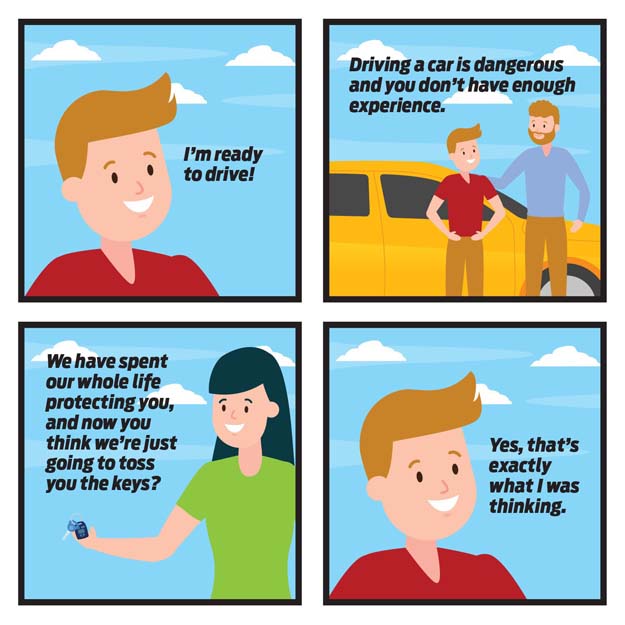 So, how can parents raise responsible and safe drivers? How can they feel more comfortable handing over the car keys?

First, your entire family must understand that the crash rate is four times higher for teens than older drivers, and that vehicle crashes continue to be the leading cause of death for teens.

Next, you need to know your state's Graduated Driver License (GDL) law as well as how and why it works. GDL is designed to provide beginning drivers with an opportunity to gain experience behind the wheel under conditions that minimize risk. GDL requires periods of supervision and probationary or restricted driving before teens can drive unrestricted with their license.

GDL is recognized as the single most effective tool for reducing teen driver crashes, injuries and deaths. The Insurance Institute for Highway Safety found that between 1996, when the first three-stage GDL program was implemented in the United States, and 2017, teen driver crash deaths fell 53 percent.

Florida was the first state to adopt GDL. Today all 50 states and the District of Columbia have a GDL law.

"GDL is a proven tool for helping teens survive their most dangerous driving years, but it's most effective when supported and enforced by parents," said Pam Shadel Fischer, Senior Director of External Engagement and Special Projects for the Governors Highway Safety Association. "Parents who monitor their teens driving, set rules and establish consequences for breaking those rules, and serve as positive role models are the key to safe teen driving."

The 3-stages of GDL include:

Stage 1: Learner's Permit
Following passage of a written test, teens can get a permit and drive supervised by a licensed adult driver. Teens must hold the permit for a set period of time, typically six to twelve months. In most states, they must also log a minimum number of supervised practice hours.

Stage 2: Intermediate License
Teens can get a driver's license, with restrictions, after passing a behind the wheel test. They can then drive unsupervised but there are typically night-time driving and passenger restrictions as well as a cellphone ban and a requirement to always buckle up.

"I want parents to know that while some states may let teens drive after curfew for work and other school activities or transport their friends, it doesn't mean that you have to allow this," Fischer added. "Late night driving is dangerous for all drivers, but especially teens. And allowing just one teen passenger in the vehicle, doubles the risk of a crash. I never let my son drive after curfew or carry multiple passengers. I never relaxed restrictions even though it would have been more convenient to let him drive. I spent the first 16 years of his life making sure he was safe and that became even more important once he started driving."

Fischer also emphasized that GDL provides parents with a set of guidelines to follow, but these should be viewed only as minimum standards. Parents need to seek out additional learning opportunities with their teen drivers and proceed cautiously when it comes to letting their teens progress from one stage of GDL to the next.

Get started by educating yourself on your state's GDL law.